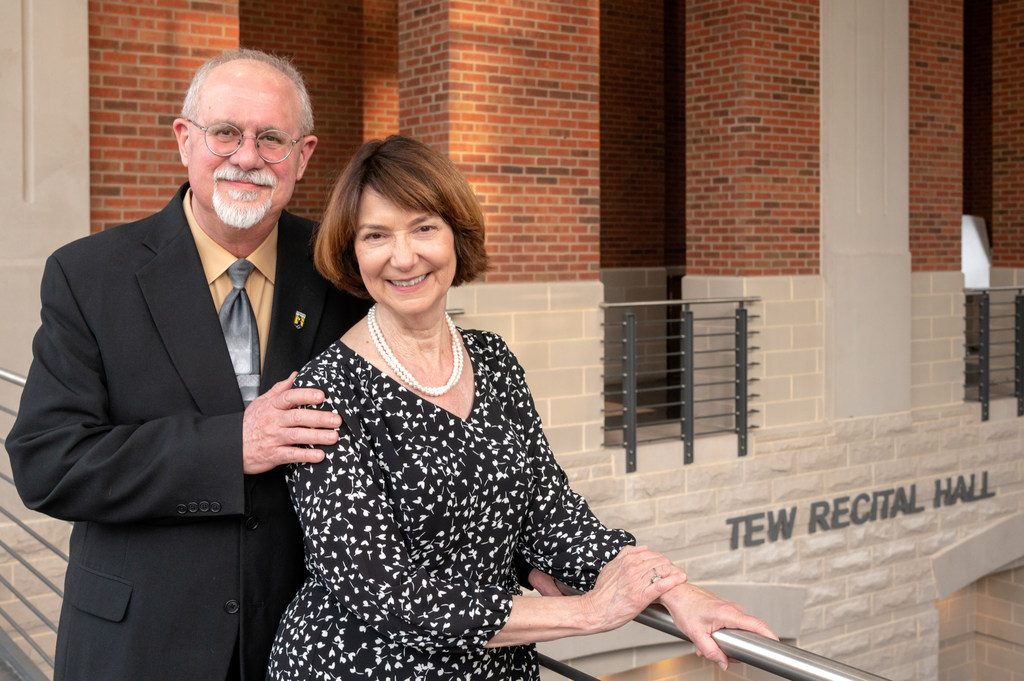 The 350-seat recital hall at UNC Greensboro’s College of Visual and Performing Arts has long been known as one of the most visually and aurally stunning performance spaces in the Triad. It is now known as the Tew Recital Hall in honor of Christopher and Laura Braxton Tew, both UNCG Class of 1969 alumni. The Tews provided a generous gift of $1 million to name the hall, honor the School of Music, and mark the 50th anniversary of the Class of 1969’s graduation.

The event to formally name the Tew Recital Hall was on April 11, 2019. The program featured compositions by Christopher Tew, including two songs for soprano and piano written while he was a student at UNCG, a piece for viola and piano, excerpted movements from three larger works for strings, and the premiere of “3 Panoramas: Memories of Japan” for string orchestra. The performances will also featured work by UNCG student Shar Joyner, Class of 2019.

“We are proud that this revered space will bear the names of Laura Braxton Tew and Christopher Tew,” Chancellor Franklin D. Gilliam, Jr. said. “Their support of UNC Greensboro, the School of Music, and the students and faculty is heartfelt and longstanding. It is truly an honor to share this gift with both the University and the community.”

Laura Braxton Tew ‘69 grew up on tobacco farms in Pitt County, North Carolina. Her interest in mathematics and science was sparked by public school teachers in Winterville. She considers UNCG her lucky break, an opportunity for work and study on campus while living in Gray, Guilford, Mary Foust, and Shaw dormitories. While at UNCG, she was an undergraduate research and teaching assistant, guided and mentored by members of the strong and gifted chemistry faculty under department chair Walter Puterbaugh.

Laura’s further educational initiatives included graduate studies in chemistry at Duke, an MBA from Pace University, and a Certificate in Corporate Citizenship from Boston College. She spent 37 years in the chemical manufacturing industry, working in ten states and on four continents and reaching for and breaking glass ceilings as she rose from the position of bench chemist to become Corporate Director of Stakeholder Relations with global responsibilities.

Upon retirement in 2009, Laura followed her proven approach in life, study first and then act. She earned a certificate in Non-profit Management from UNCG in 2013. This course of study, along with the year-long IMPACT Greensboro program at the Center for Creative Leadership, prepared her for an active life of volunteerism and philanthropy, always giving back to the community. She also made time to become a Master Gardener and serve on the board of Heads Up for Our Youth. Her retirement bucket list has afforded many interesting opportunities, and she is currently following her passion to further the STEM pipeline for women through science and technology education for girls. Laura credits UNCG for its generosity in providing facilities and staff services for events coordinated with Women in STEM, her colleagues at the American Association of University Women.

Christopher C. Tew is originally from McLeansville, NC and a graduate of UNC Greensboro. A professional composer, Tew was the first UNCG student to ever have his works performed by the UNCG Sinfonia and Symphony. Over the last 50 years, he has composed concert music for school, community, and professional orchestras. He has received commissions from groups as diverse as Louisville’s Jewish Community Center, Chattanooga’s Girls Preparatory School, the Muncie Symphony Orchestra, and the Chamber Orchestra of Tennessee. His works have been performed by numerous professional orchestras, including the Salisbury and Hickory Symphonies and the NCSU Orchestra, as well as orchestras in Livonia, MI; Lake Charles, LA; West Hartford, CT; and Lone Tree, CO, as well as featured in a festival in Lviv, Ukraine. The Bratislava Symphony Orchestra in Slovakia has recorded two CDs of his compositions, including most of the works featured in the dedication program.