Each year, the College of Visual and Performing Arts honors a select group of alumni for their achievements in artistic performance, research, and education. Our Distinguished Alumni Award recipients represent excellence in Art, Dance, Music, and Theatre.

This month, College of Visual and Performing Arts will award its highest honor to four alumni who exemplify excellence in their fields, recognizing them for their achievements in artistry and education. 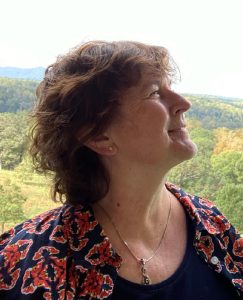 Professor Emerita Melinda Waegerle earned her BS in Dance Education in 1981 from UNC Greensboro, studying under Dr. Sue Stinson. She started her career as the first dance educator in the Durham City Public Schools. In 1994 she was hired to teach dance in the Guilford County Schools at Parkview Village Elementary School. Waegerle was recognized formally as “Teacher of the Year” in 2000 at Parkview Elementary and received the Ethel Martus Lawther Alumni award in 2002 from the UNCG School of Health and Human Performance for her contributions to the field of dance education. She has been recognized for her positive impact and leadership in the communities where she has taught, maintaining lasting relationships with many of her students and colleagues.

Waegerle was a senior fellow for the A+ Schools program from 1994 to 2017. She developed and conducted professional development for educators and served on panels with the A+ Schools Program for North Carolina, Oklahoma, South Dakota, North Dakota, and Arkansas. In 1994 Waegerle began as a teaching assistant at UNCG while completing her MA in dance education. In 1998 she began working with licensure students and later became an Assistant Professor and continued to teach joyfully until her retirement in May 2022.

In 2017 she accepted a position as program director from UNCG for the Guilford County Schools Arts Integration Program, a US federal grant. The grant was an exciting opportunity to research the integration of arts through and with other content areas. Now in the early phase of retirement, Melinda looks forward to nurturing her gardens and grandchild, and advocating for and serving the immigrant and refugee communities through her church and other organizations. 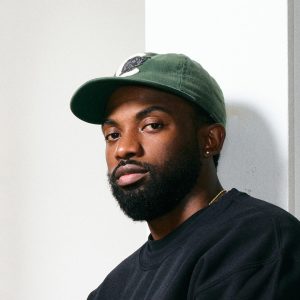 Born in 1984 in Asheville, North Carolina, Sherrill Roland studied at Skowhegan School of Painting and Sculpture (2018) and earned his MFA and BFA degrees from the University of North Carolina at Greensboro (2017 and 2009).

He has had solo exhibitions at Tanya Bonakdar Gallery, New York (2022); Southeastern Center for Contemporary Arts, Winston-Salem (2022); Maria & Alberto de la Cruz Gallery, Georgetown University, Washington, DC (2019); Los Angeles Contemporary Exhibitions (2017): among others. His work has been included in group exhibitions at the San Jose Museum of Art (2020); Tufts University Art Galleries, Medford, MA (2020); Addison Gallery of American Art, Andover, MA (2019); Contemporary Arts Museum, Houston (2018); and Studio Museum in Harlem (2017). Roland is the recipient of the Creative Capital Award (2021) and South Arts Southern Grand Prize & State Fellowship (2020), and was an Art for Justice Grantee (2020), in addition to many other awards and recognitions. He has had fellowships and residencies at Fountainhead, Miami; Duke University; Otis College of Art and Design, Los Angeles; among others. Roland’s work is in the permanent collections of the Studio Museum in Harlem; North Carolina Museum of Arts, Nasher Museum, and Harvey B. Gantt Center for African American Arts + Culture in Charlotte.

He lives and works in Durham. 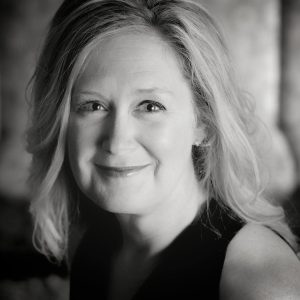 Brown completed a DMA in instrumental conducting at the University of North Carolina at Greensboro where she was a student of John Locke and Kevin Geraldi. While at UNCG, she was both guest conductor and principal horn on UNCG Wind Ensemble’s fireworks! and finish line! CDs on the Equilibrium label. Brown has also had several rehearsal guides published in the popular GIA Publications series Teaching Music through Performance in Band and has presented at the Midwest Clinic in Chicago; Oxford Conducting Institute; Music for All Summer Symposium; the Yamaha Bläserklasse in Schlitz, Germany; the International Computer Music Conference in Ljubljana, Slovenia; the College Music Society International Conference in Sydney, Australia; and multiple times at the College Band Directors National Association National Conference.

A proponent of inclusion and equity issues in the music profession, Brown is a frequent guest speaker on these topics. She currently serves on the CBDNA Diversity Committee and is a member of the Drum Corps International In Step Committee. Brown is the founder of “Women Rising to the Podium”—an online group of over 4,200 members supporting and celebrating women band directors. Additionally, she also serves as Chair of the Sigma Alpha Iota Women’s Music Fraternity Graduate Conducting Grant and an advisor of the SAI chapter at the University of Maryland. 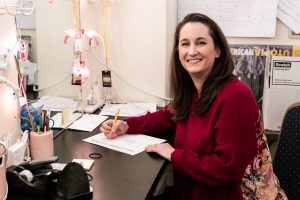 Julie DeVore is proud to have graduated from the University of North Carolina at Greensboro in 2010 with a BFA in Technical Production. From there she moved to New York and immediately started working as a production assistant for Broadway shows such as Billy Elliot, Wicked, The Motherf**ker with the Hat, and Nice Work if You Can Get It. She left Nice Work to get her equity card to become an assistant stage manager on the national tour of The Addams Family. When that show closed, she then re-joined the company of Wicked as universal sub, where she traveled between the Broadway company and two national tours covering the stage management team. She also started subbing for the national tour of Once around the same time.

She stopped touring when she got a full-time position at Wicked on Broadway and then started working on developing musicals in her spare time. Eventually she left Wicked to take one of those developing projects to Broadway and that was On The Town. Next, she worked on the Broadway productions of School of Rock followed by King Kong, and American Utopia. During the pandemic, she pivoted and started Production Stage Managing Virtual productions. When Broadway opened back up, she was promoted to be Production Stage Manager of American Utopia and became a part-time instructor at the State University of New York at Purchase. Since American Utopia, she has worked on POTUS, Beetlejuice, Into the Woods, and more developmental musicals and plays.

She is very grateful to all of her mentors, friends, and family who have been encouraging her to follow her dreams.