Dance of the Paper Umbrellas 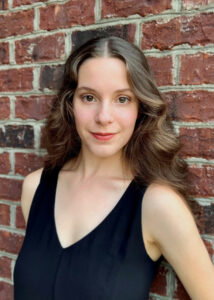 Claire Griffin is a soprano from Brevard, North Carolina in her senior year at UNCG. She is pursuing a BM in Vocal Performance and is a student of Dr. Carla LeFevre. Her operatic credits include Eurydice (Orpheus in the Underworld) with the Utah Vocal Arts Academy and Lucy (The Telephone), Adele (Die Fledermaus), Sister Genevieve (Suor Angelica), and Jenny Slade (Roman Fever) with the UNCG Opera Theatre. In March of 2022, she will sing Marie in Bedřich Smetana’s The Bartered Bride at UNCG. For Greensboro Opera’s Opera at the Carolina, Ms. Griffin has sung Lauretta (Gianni Schicchi) and Gretel (Hansel and Gretel). In 2015, Ms. Griffin originated the role of Deanna Durbin in the world premiere of Chasing Rainbows: A New Musical at the Flat Rock Playhouse. Continuing with this project in the same role, she participated in numerous NYC readings and a four-month run at the Goodspeed Opera House in Connecticut, where she also understudied the role of Judy Garland. Ms. Griffin was accepted into the Janiec Opera Company at Brevard Music Center for the summer of 2020, which was unfortunately canceled due to COVID-19, where she would have sung Marzelline in Fidelio: In Concert and covered the role of Blondchen in Die Entführung aus dem Serail. She was one of 10 finalists in the Opera Grand Rapids Collegiate Vocal Competition in the spring of 2021 and was awarded First Place (Lower Collegiate Women) in the National NATS competition of 2020. Ms. Griffin was a 2018 YoungArts Winner in Voice and a Semi-Finalist for the U.S. Presidential Scholar for the Arts that same year. She will spend her 2022 summer at the Aspen Music Festival as a Studio Artist in the Opera Theatre and VocalARTS program under the co-artistic direction of Patrick Summers and Renée Fleming.