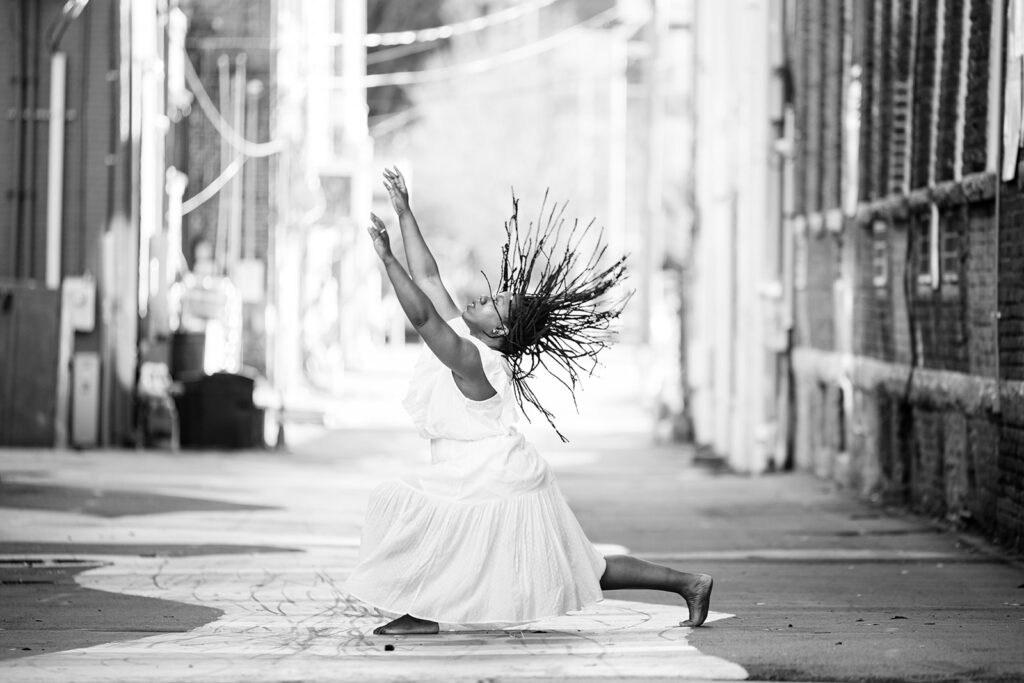 For Alexandra Joye Warren, starting her own dance company was not so much an act of entrepreneurship as it was a calling. It just took her some time to listen to it.

Warren was in her senior year, completing a BA degree in Drama with a concentration in Dance/Pre-Medicine from Spelman College, when she first heard that calling. She had begun looking for medical schools and planned to pursue a career in dance science, physical therapy, or even orthopaedic surgery when she realized that wasn’t the path for her:

“It dawned on me — I was not pursuing dance because I was a little bit afraid. Dance is such an uncertain field. But I realized that as much I was interested in science and medicine, that interest was rooted in the desire to be secure. Security is not a bad thing, but it’s not enough. At the end of the day, I’m an artist no matter how risky that can be. So I shifted my search for med schools to MFA programs.”

Warren says the first person she met on the UNC Greensboro campus was the late Jan van Dyke, choreographer, dancer, and the head of what was then the Department of Dance, now the CVPA School of Dance:

“I felt so welcomed. It was so different from any other school I’d visited. And it was a great place for me to grow. The entire faculty was so generous with their time and expertise, and they exposed us to so many ways of thinking about the art — as choreographers, dancers, and writers. The faculty was so diverse, from so many different places and performance backgrounds. I’d never done contact improvisation until I worked with BJ Sullivan. Then Duane Cyrus came in and shared his experiences with musical theatre, Martha Graham, and Alvin Ailey. It built me up and gave me confidence. I had a foundation.”

After earning her MFA in Dance Performance in 2006, Warren went to New York where she performed and taught. She danced with and eventually served as Artistic Director for INSPIRIT, a dance company formed by fellow alumna Christal Brown. She gave Warren the space and the funding for projects, and Warren was able to hone her skills as a choreographer before returning to Greensboro in 2013 to work with the Van Dyke Dance Group.

That’s when the calling became even stronger: “I was missing the kind of work I was doing in New York. I thought “Oh boy, here I go.” I have to create a space for professional dancers here.”

This time Warren listened to her heart, starting her own company JOYEMOVEMENT.

“I decided I didn’t have to know everything right away. I could start with what I knew, which is how to make a dance. My time as a student at UNCG and at Spelman, and my experience in New York prepared me to know how to create a show. And I went from there. Step by step. Finding the dancers. Creating a website. I’ve had to use every skill that I have, and as the company grew I had to grow, and I had to be okay with stretching. One thing I learned from my work with Christal is not to be a one-performer show. I’m always trying to train and pass responsibilities along. I’m only one person. I can’t be everywhere all the time, but I feel our work is successful because of the way we operate.”

JOYEMOVEMENT is now in its 6th season, with a mission “to tell stories of the African Diaspora that inspire audience members and participants to reexamine embedded societal ideas.”

“That’s big, really big, right? But these stories need to be told. That’s the main driver of what we do here. I explore history and lineage and what is happening currently. The very first piece for JOYEMOVEMENT was “Stand Your Ground.” It came from me trying to work out choreographically, in a therapeutic way, what was going on with the trial of George Zimmerman and the loss of Trayvon Martin. I was feeling so overwhelmed and confused. I was trying to reconcile how we could have Barack Obama as President and still these things were happening. So I went into the studio to try and work it out through movement. I didn’t start out saying we’re going to be about social justice. But that’s what kept coming up.“

During the pandemic, Warren was moved to take her dance into the great outdoors:

“It was an idea that came to me because of the pandemic. So many things have been limited, but one thing I could still do is take walks. Wherever I walked I enjoyed nature and dreamed of making work in those safe outdoor spaces. I would see pieces in my head, and I thought, “Why not?” There are residencies in the National Parks System in places like Joshua Tree and Yellowstone. I’d always wanted to do one of those, then it occurred to me. There’s no need to go across the country for that, when we have so many wonderful parks here.”

Warren approached the city and they entered into a partnership in which she is now serving as Greensboro Downtown Parks’ inaugural Artist-in-Residence. Warren and her company will spend focused time to creatively explore the natural and cultural resources of LeBauer and Center City Parks as they develop their newest work “A Wicked Silence,” a dance exploration of the history, narratives, and consequences of the Eugenics Movement in North Carolina.

The residency will serve as a pilot for the official launch of a permanent Artist-in-Residence program for the city.

While Warren continues developing her work, she’s also helping young artists develop their craft at Elon University, where she was recently made full-time, tenure track Assistant Professor of Performing Arts:

“Students are smarter now about College and about how and where they spend their tuition dollars. That’s great, but I don’t want to see them drift away from the joy of learning. I say be curious about everything. You’ll embrace some things, and you’ll toss some things away. Be glad for the experience of being able to make mistakes in a safe place. Enjoy the failures and the mistakes as much as you do the successes. We learn so much from both.”