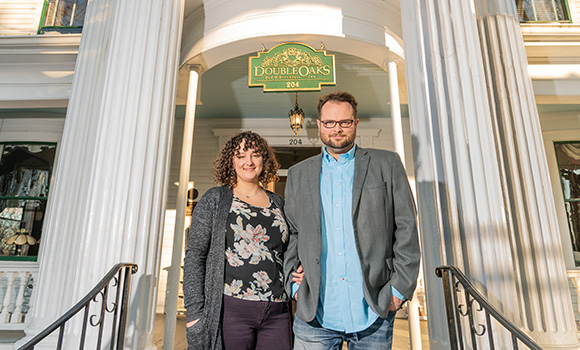 Long before “nimble,” “flexible,” and “pivot” became the buzzwords of the pandemic, one segment of the workforce already had those things down pat. The career path of an artist is full of twists and turns. Just ask School of Music alumnus James Keith:

“There are lots of ways to make the arts a big part of your life. You can make a life in music that can be extremely satisfying. You just need to realize it might not be exactly what you thought it would be when you were seventeen.”

Keith and his wife, Amanda, came to UNC Greensboro for master’s degrees—his in Music, hers in English. She now holds a prime editing position at Wake Forest Press. He earned an MM in Vocal Performance and went on to get his DMA in Choral Conducting. How then did they wind up owning and operating the Double Oaks Bed & Breakfast in the historic Westerwood neighborhood just across Friendly Avenue from campus?

In the middle of his doctoral studies, Keith sustained severe injuries in a car fire. He realized that he just couldn’t keep up with the physical demands of teaching and conducting full-time. At the same time, a beautiful, old home on Mendenhall Street became available. Keith says it was meant to be:

“When I first arrived in Greensboro in 2005, I was driving to the School of Music for my audition, I drove by this place. I told my wife I was going to buy it for her one day. We laughed abut that. Several years later we made an offer. We closed the sale on Amanda’s birthday. Double Oaks is my big punt.”

When it comes to business, it has been said that location is everything, and for the Keiths and Double Oaks that couldn’t be more true. Nestled between downtown and Friendly Shopping Center and in close proximity to four college campuses, Double Oaks is in the right place for travellers, locals, faculty, and students.

“We are right here in a neighborhood. It’s a grand house, but it’s still a home. We’re harkening back to what the original family wanted it to be—a place for parties. This place has hallways that are thirteen feet wide. That’s what you have if you want to have people around.”

Double Oaks opened in 2017. Since then, it has become more than an inn. It’s a local watering hole, and on “Wine Wednesdays” guests are always treated to the sounds of UNC Greensboro musicians:

“Music makes all the difference. I really treasure my relationship with the University and especially the School of Music. I want this to be a place for young musicians to get their start. They work here awhile then move on. Our last band leader is now at Juilliard. I can’t give them a 40 hour a week job, but it’s a steady gig, and the networking gets them jobs like weddings and other events.”

And sometimes you have to create the jobs for yourself:

“There‘s nothing about the arts that is not networking and connection building. It all hinges on those relationships. Even though the fire took away my ability to be a full-time conductor at a university, I still wanted to do that work. Through the years as an innkeeper, I’ve gotten to know the Greensboro Symphony conductor. He stays at Double Oaks when he’s in town, so we started talking, and we formed the Greensboro Master Chorale. I, along with another UNCG alum, were supposed to conduct on opening night of the Tanger Center for the Performing Arts in April 2020. The pandemic prevented that from happening, but maybe the Chorale will start back up when things get better.”

The Keiths say plans are underway to expand their business and their relationship with UNCG into the western part of the state. They are looking at a hotel built in 1833 in Burnsville, which is the home of Parkway Playhouse, the oldest continually operating summer theater in North Carolina. It was established in 1947 by Dr. William Raymond Taylor, former UNCG Theatre head and the namesake of Taylor Theatre.

Running an inn may not be what he started out to do, but like most artists, James Keith knows how to pivot:

“There’s a natural entrepreneurial aspect to the arts as a career. I gotta admit I’m having a blast. This is not a bad life.”