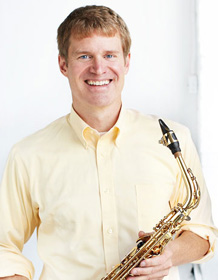 Dr. Steven Stusek, saxophone, is Associate Professor of Music at the University of North Carolina at Greensboro, where he is a member of the Eastwind Quintette d’Anches and the Red Clay Saxophone Quartet. Originally from Oshkosh, Wisconsin, he received his Bachelor’s degree in saxophone performance from Indiana University. Before beginning a Master’s degree in saxophone and chamber music at Arizona State University, Steve spent a year in Paris studying at the Paris Conservatory (Conservatoire Nationale Superior de Musique de Paris) and the Conservatoire de le Région de Paris, where he was awarded the Prix d’Or à l’Unanimité in Saxophone Performance. After living in the Netherlands for almost eight years he returned to Indiana University and was awarded a DMA in Saxophone in 2001. He has served on the faculties of Ball State University, Middlebury College, the Cincinnati Conservatory of Music. He has been on the UNCG faculty since 1999. As a soloist, Steve has appeared with the Eastern Music Festival and more recently with the University of South Carolina Wind Ensemble as part of the North American Saxophone Alliance Biennial conference. He has been the principal saxophonist for the Eastern Music Festival and the Greensboro Symphony for the past ten years. In 2000, he won the prestigious Dutch Chamber Music Competition as part of the saxophone-accordion duo 2Track with accordion virtuoso Otine van Erp. Together they have performed throughout the Netherlands, the US and on Dutch radio. Steve teamed up with pianist Inara Zandmane and saxophonist Susan Fancher to produce the critically acclaimed recording Louder than Words – music for two saxophones and piano. Steve’s teachers have included Eugene Rousseau, Joseph Wytko, David Baker, Larry Teal, Daniel Deffayet, Jean-Yves Formeau, and Leroy Wolter. Steve is the Past-President of the North American Saxophone Alliance.