This event is free and open to the public. Tickets are not required. 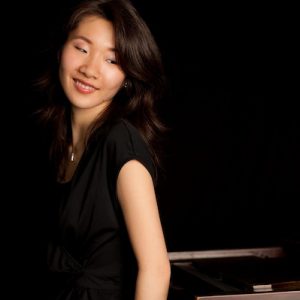 Pianist Akiko Yamazaki has performed extensively as soloist and chamber musician in venues including Weill Recital Hall at Carnegie Hall. She made her orchestral debut with the Raleigh Symphony Orchestra as a recipient of the Benjamin Kilgore Gibbs award in 2004. She has appeared as a guest artist at universities including Utah State University, and University of Wisconsin – Stevens Point. An avid chamber musician, she has collaborated with the members of the North Carolina Symphony and the faculty at the University of North Carolina at Chapel Hill. At A Symposium for 21st Century Musicians, she gave the world premiere performance of Matthew Orlovich’s Dawn Rhapsody with violinist Karen Galvin. As a pedagogue, she is active as a presenter, adjudicator, and master class clinician.

The Sinfonia is dedicated to broadening the artistic performance level of its members while presenting programs that encompass a wide range of styles, from Baroque, Classical, Romantic, and Modern eras. Faculty members are frequently featured as guest soloists, and the Sinfonia has performed several world premieres and collaborated with students from the UNCG Department of Dance on recent performances. For non-music majors, the Sinfonia provides a musical outlet while studying in another discipline. Membership is determined by audition for music majors, and additionally is open to talented university students who are preparing for life-long involvement in the arts without audition.