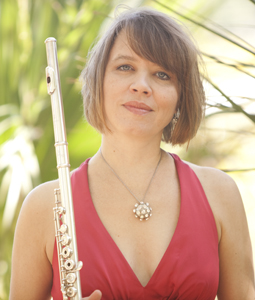 Flutist Jennifer Parker-Harley is Associate Professor of Flute at the University of South Carolina in Columbia where she enjoys a versatile career as a teacher and performer. An experienced orchestral flutist, Jennifer was a member of the Columbus Symphony Orchestra in Ohio for eight years before moving to South Carolina. During her tenure there, she appeared as soloist with the CSO, as well as many other orchestras in the central Ohio area. Jennifer has also been a member of the Ft. Wayne Philharmonic and the Chautauqua Symphony Orchestra and has performed with the Cincinnati Symphony, the St. Louis Symphony, the Augusta Symphony, the South Carolina Philharmonic and the Charleston Symphony.

An active recitalist, and prizewinner in several national competitions, including the 1998 and 2001 National Flute Association’s  Young Artist Competitions, Jennifer appears as a frequent performer at the NFA’s annual convention and in schools and music series across the country.

Teaching is an especially important part of Dr. Parker-Harley’s musical life.  She has a holistic approach to teaching the flute that includes extensive study of the mental aspect of performance.  She has worked closely with peak performance psychologist, Dr. Todd Kays, which has greatly informed her own approach to performance as well as her teaching of young flutists. She has a very accomplished studio at USC- several recent graduates hold college teaching posts and others have gone on to study at such prestigious institutions as the Cincinnati College-Conservatory of Music, the Peabody Institute, the Cleveland Institute of Music, Northwestern University, the University of Texas and the Manhattan School of Music.  Her students have also been prizewinners in several competitions of the National Flute Association, the Florida Flute Association, the Kentucky Flute Society, the Central Ohio Flute Association and the South Carolina Flute Society.

Dr. Parker-Harley is an honors graduate of the Interlochen Arts Academy, holds a bachelor’s degree and a performer’s certificate from the Eastman School of Music, and graduate degrees from Michigan State University and the University of Cincinnati College-Conservatory of Music. She is privileged to have studied with wonderful flutists and teachers: Kay Borkowski, Jaqueline Hofto, Bonita Boyd, Richard Sherman, Dr. Bradley Garner and Jack Wellbaum.