The Hopes and Dreams of Flightless Birds (world premiere) 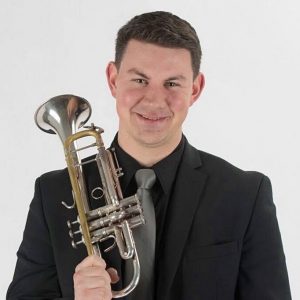 Trumpet artist Garrett Klein has performed across the United States and Asia as a soloist, chamber player, and orchestral musician. He is currently serving as Assistant Professor of Trumpet at UNC Greensboro where he leads the Trumpet Studio, coaches the Graduate Brass Quintet, and directs the Trumpet Ensemble. Previously Garrett served on the faculties of St. Olaf College and Gustavus Adolphus College.

Garrett is a member of the Dallas Brass, an internationally recognized touring ensemble. Dallas Brass has a legacy of presenting uplifting performances, which span a wide array of musical styles. In addition to performing shows across the country, Dallas Brass demonstrates a steadfast commitment to music education by working to inspire students of all ages while on tour.

Outside of touring with Dallas Brass, Garrett has performed with the Charlotte Symphony, Winston-Salem Symphony, the North Carolina Brass Band, and the Carolina Brass. He has also appeared as a guest musician with The Phoenix Symphony, the Tucson Symphony Orchestra, the New World Symphony, the Singapore Symphony Orchestra, and the Malaysian Philharmonic Orchestra. Additionally, Garrett is an Associate Artist with the Rodney Marsalis Philadelphia Big Brass. A new music advocate, Garrett has worked with composers to commission new works for trumpet, presenting newly composed works at International Trumpet Guild Conferences.

Garrett earned his DMA and MM degrees at Arizona State University, along with a Certificate in Music Theory Pedagogy. Prior to ASU, he studied at the prestigious Yong Siew Toh Conservatory of Music in Singapore and St. Olaf College in Minnesota. Garrett Klein is an endorsing artist for Conn-Selmer and proudly performs on Vincent Bach trumpets.