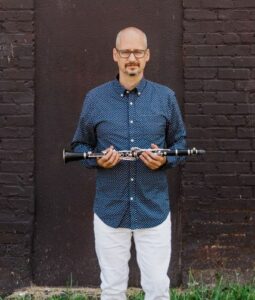 Anthony Taylor, clarinet, has been on the faculty of the UNC Greensboro School of Music and Principal Clarinet of the Winston-Salem Symphony since 2007. He has been an Artist/Teacher for the Eastern Music Festival since 2013 and served on the faculty of the Hot Springs Music Festival (Arkansas) from 2008–2012. He has formerly held positions with the Spokane Symphony, the Boise Philharmonic, Washington State University, Eastern Washington University, and Whitman College. Taylor’s clarinet playing can be heard on recordings on the Navona, Centaur, Naxos American Classics and Gothic recording labels, and the most recent releases are two Centaur records projects with New Music Raleigh. The most recent is the world premiere recording of Brett William Dietz’s opera introspective Headcase, and another recent release is the debut recording of composer DJ Sparr, 21207. He can also be found on youtube; his video promoting his March 2011 basset clarinet performances of the Mozart concerto with the Winston-Salem symphony now has nearly 100,000 views. In 2014, Taylor was among the first performers of Donald Crockett’s Dance Concerto(please see media page for recordings). He has appeared at the International Clarinet Association ClarinetFest®, with a notable performance of John Adams’s clarinet concerto Gnarly Buttons in 2010 and in 2011, the world premiere of UNCG composer Alejandro Rutty’s work for Guitars, for two clarinets and Ableton Live-based electronics. In recent years, Taylor has been expanding his pedagogical skills through extensive study of human movement and the Alexander Technique, and expects to complete his ATI certification as a teacher of the Alexander Technique some time during the 2016–17 academic year. Taylor holds degrees from the University of Cincinnati College-Conservatory of Music, the Florida State University and Washington State University. His former teachers include Steve Cohen, Ron Aufmann, Richard Hawkins, Frank Kowalsky, Jim Schoepflin, and Joseph Brooks.

The renowned UNCG Bands are dedicated to the performance, study, and cultivation of wind band music of the highest quality, and are a serious and distinctive medium of musical expression. The UNCG Bands are considered to be among the very finest collegiate band programs in America based upon our active profile of excellence in our performances, recordings, tours and convention performances.

Through exemplary practices in organization, training, and presentation, the UNCG Bands provide exceptional experiences for our members, sharing outstanding performances throughout the year and enhancing the institutional spirit and character of UNCG.

The UNCG Bands seek to support music education in the state of North Carolina and in our region by providing leadership and sponsorship to secondary school band programs and other organizations.