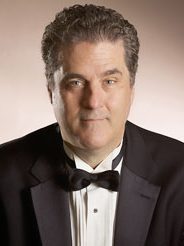 David Holley has been the Director of Opera at UNCG since 1992 and was appointed as the Artistic Director of Greensboro Opera in June, 2013. Recent directing/producing credits include two acclaimed Greensboro Opera productions, La Cenerentola (August, 2015) and La fille du régiment (January, 2015). Of the latter, the Greensboro News and Record said, “Simply put, Holley and the cast put on one of the finest performances in recent Triad memory.” Mr. Holley is also the founder and Artistic Director of Greensboro Light Opera and Song (GLOS), which completed a highly successful fourth season last June with performances of Gilbert & Sullivan’s Iolanthe in Greensboro and Beauty and the Beast at Roanoke Island Festival Park. GLOS 2016 will feature G&S’s Ruddigore and Seussical Jr. at RIFP.

In the Spring of 2009, he produced and directed the World Premiere of Picnic, an opera by prominent American composer Libby Larsen. He secured a $150,000 grant from the Charles A. Babcock Foundation to commission Picnic, for which he also wrote the libretto. His productions have consistently won awards in the National Opera Association’s annual Opera Production Competition, including seven first place and three second place NOA awards since his arrival at UNCG. In 2005, four audio excerpts from Adamo’s Little Women were released and distributed to opera companies world-wide on “Thirty New Operas,” a CD sampler produced by G. Schirmer, Inc.

Mr. Holley served on the faculty of the Brevard Music Festival from 1994-2001, where he staged operas such as The Magic Flute, Suor Angelica, Gianni Schicchi, The Barber of Seville, Orpheus in the Underworld, and La Cenerentola, as well as musicals such as South Pacific, West Side Story, Guys and Dolls and A Funny Thing Happened on the Way to the Forum. He has served as stage director for the Greensboro Opera (Gianni Schicchi) and Pensacola Opera (Barber of Seville), and at a variety of educational institutions, including an engagement as distinguished guest alumni director of My Fair Lady at Furman University, as part of their 175th anniversary.

An active performer, Mr. Holley has appeared with regional opera companies in Dallas, Atlanta, Rochester, Phoenix, Banff (Alberta, Canada), Greensboro, Shreveport, Baton Rouge, Albuquerque, Las Vegas, Pensacola, and elsewhere in a diversity of leading lyric tenor roles including Pinkerton in Madama Butterfly, Don José inCarmen, Tamino in The Magic Flute and the title roles in The Tales of Hoffmannand Roméo and Juliette. Notable engagements have included Cavardossi opposite Angela Brown’s Tosca, Don José with Luretta Bybee and Herbert Perry (directed by David Morelock), as well as Pinkerton with Nikki Li Hartliep. Reviewing his performance in Wiener Blut, The American Record Guide said, “tenor David Holley as the Count with the roving eye was ringing, wide-ranging, hale and hearty: a vivid characterization”, and in the title role in Der Vogelhändler, “a singing and acting delight.” Opera News has hailed him as “…that rare find, a tall tenor who can act.”