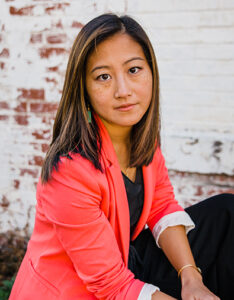 Annie Jeng is a pianist, educator, and collaborator. She is committed to listening, learning, and becoming a better member of society with the hopes of paving roads for justice, collaboration, and kindness in communities. She has performed widely in such settings as the Brancaleoni International Music Festival in Italy, the Gijón International Piano Festival in Spain, the Kennedy Center, Interlochen Arts Academy, and China. (However, she sometimes prefers to perform in intimate spaces such as living rooms, personal Zoom calls, and breweries.) Recent performances have included Beethoven’s Choral Fantasy with UNCG’s University Symphony Orchestra, Ravel’s Piano Concerto in G major with the Ann Arbor Symphony Orchestra, Messiaen’s La ville d’en haut with the University of Michigan Symphony Band, and Messiaen’s Oiseaux exotiques with the University of Michigan Contemporary Directions Ensemble. A Presser scholar, Annie has presented at Music Teachers National Association (MTNA) conferences at collegiate, state, and national levels and College Music Society (CMA) regional conferences.

Annie’s essential goal as an artist is to make communities richer and more meaningful through the arts. To this end, Annie strives to make music accessible to audiences of all backgrounds by expanding and rethinking the traditional recital format to include interdisciplinary and interactive elements, all with the aim of encouraging audiences to engage with the artistic experience. Recent projects include, “Music by the Barrel,” which was a concert series at the Ann Arbor Distilling Company in Ann Arbor, “Beyond the Keys: Unlocking Piano Works” which was an interactive concert on the roof of a parking deck performed by her piano pedagogy students, and “Brews-keys” which featured UNCG piano faculty and students at Oden Brewing Company in Greensboro, North Carolina. She also led music workshops that focused on group singing and music as a form of expression through the Prison Creative Arts Project at University of Michigan.

During the onset of the COVID-19 pandemic, Annie personally picked up and delivered keyboards to UNCG piano students in order to ensure that music within student’s lives would not be stopped. As a strong believer of creating a better and more equitable “normal,” she also founded A Seat at the Piano (ASAP) in the summer of 2020 (aseatatthepiano.com). ASAP is a resource that is dedicated to the promotion of inclusion in the performance and study of solo piano repertoire.

Much of Annie’s research is devoted to contemporary music and studying the pedagogical capabilities of contemporary piano techniques. In 2018, Annie received the Rackham Predoctoral Fellowship from the University of Michigan to create a pedagogical resource called Circles and Lines that will feature newly commissioned works by female composers that introduce unconventional piano techniques to intermediate pianists. She is also the pianist of Khemia Ensemble (khemiaensemble.com), a contemporary chamber ensemble that is dedicated to promoting contemporary classical music by cultivating inclusive place-making, collaborative mentorships, and authentic storytelling through immersive, multimedia performances. She released the album, “World Map” with Parma Recordings as the former pianist of Four Corner’s Ensemble. Committed to supporting musicians in finding their unique career path, she also worked as a Programming Assistant at University of Michigan’s Excellence in Entrepreneurship, Career Empowerment & Leadership (EXCEL) Lab. She also serves as a member of the National Conference on Keyboard Pedagogy (NCKP) Career Development and Innovation Committee.