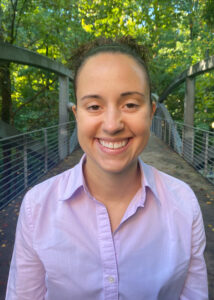 Kristin Arp is currently pursuing a Doctor of Musical Arts degree at the University of North Carolina at Greensboro with Dr. Kevin Geraldi and Dr. Jonathan Caldwell. Before coming to UNCG, Kristin taught high school and middle school band in the Knox County, Tennessee public schools.

Kristin holds bachelor’s and master’s degrees in Music Education and Instrumental Conducting from the University of Tennessee, Knoxville where she studied with Dr. Donald Ryder and Dr. David Royse. At UT, she frequently conducted the University of Tennessee Concert Band, Symphonic Band, Wind Ensemble, Percussion Ensemble, and Trumpet Ensemble. As a graduate assistant for the Pride of the Southland Marching Band, Kristin’s responsibilities included teaching drill, music, and the supervision of Volleyball and Basketball Pep Bands. She also has extensive experience with Drum Corp International and performed with 2009 DCI World Championship Finalists, the Troopers Drum & Bugle Corps from Casper, Wyoming. 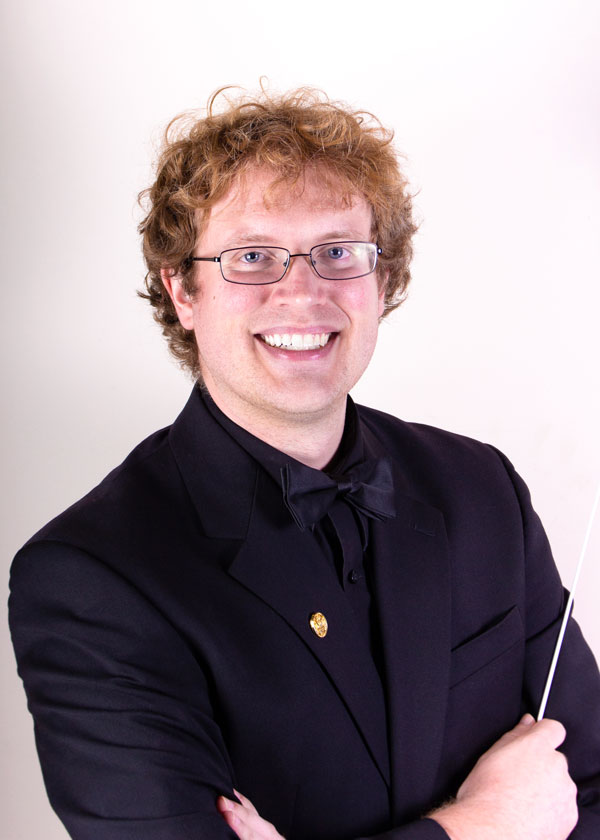 Cole Hairston is a North Carolina native currently pursuing the Doctor of Musical Arts degree at The University of North Carolina at Greensboro, where he studies with Dr. Kevin Geraldi and Dr. Jonathan Caldwell. He taught public school in North Carolina for five years. During this time he taught band, chorus, music specialization, and math. In his fourth year of teaching he was awarded Teacher of the Year for his school and was a top 5 finalist for Teacher of the Year in Gaston County.

Cole earned his Masters degree in conducting from the University of Wisconsin at Madison where he studied conducting with Scott Teeple. In Wisconsin, Cole was the head conductor of niversity Band while guest conducting with the Concert Band, Wind Ensemble, and Wisconsin Marching Band. He also had the opportunity to guest conduct local music programs and chamber ensembles. In addition to conducting, Cole also studied clarinet with Alicia Lee and performed in the Wind Ensemble. He was accepted to play clarinet with the World Youth Wind Orchestra Project in Austria during the summer of 2018. Cole earned the Bachelor of Music Education degree from UNC Greensboro.

At home Cole loves to spend time with his wife and two dogs. They love to explore and try new food while moving around the country. 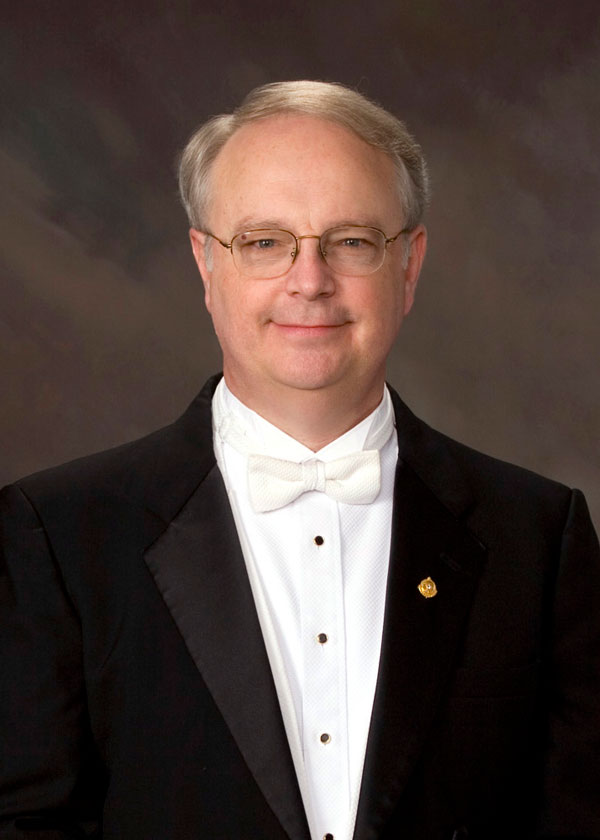 Since 1982, Dr. John R. Locke has served on the UNCG School of Music faculty as Director of Bands, Director of Summer Music Camps, conductor of the Wind Ensemble, and conducting teacher. He holds the Bachelor and Master of Music degrees from West Virginia University and the Doctor of Education degree from the University of Illinois. Prior to his arrival in North Carolina, Dr. Locke held teaching positions in music at West Virginia University, Southeast Missouri State University, and the University of Illinois. He has conducted band performances throughout the world including National Conventions of the MENC, CBDNA, ABA, the Kennedy Center in Washington, D.C., the Strathmore Center in Washington, DC, Lincoln Center in New York City, Dvořák Hall in Prague, Innsbruck, Bologna, and Rome, Italy. Twice, the UNCG Wind Ensemble earned critical acclaim from The Washington Post newspaper following concert performances in the nation’s capital. Under Locke’s leadership, the UNCG Wind Ensemble has released 21 commercially available compact discs including fireworks! which was a Grammy Entry List 2011 CD in two categories, “Classical Album of the Year” and “Best Orchestral Performance.” In addition, he has guest conducted the U.S. Air Force Band, U.S. Army Field Band, U.S. Navy Band, “The President’s Own” U.S. Marine Band, the Dallas Wind Symphony, as well as numerous university bands including University of Illinois, Iowa, LSU, Alabama, Florida, West Virginia, Idaho, Georgia, Nebraska – Omaha, Long Beach State, Troy, Bowling Green, South Florida, Furman, Youngstown State, Boise State, Morehead State, Eastern New Mexico, Washburn, Kennesaw State and numerous all-state honor bands and intercollegiate bands. Dr. Locke has served as Editor of The North Carolina Music Educator and has published articles on band and wind ensemble literature in the Journal of Band Research and in Winds Quarterly. He is Past-President of the North Carolina Music Educators Association representing 2,200 members. Dr. Locke is a recipient of Phi Mu Alpha’s Orpheus Award and has received the National Band Association Citation of Excellence on three occasions. He is a National Arts Associate of Sigma Alpha Iota. In 1989, Dr. Locke was among the youngest conductors ever to be elected to membership in the prestigious American Bandmasters Association. In 1994, he received the Phi Beta Mu International Fraternity Outstanding Bandmaster of the Year Award, presented at the Mid-West International Band Clinic in Chicago. Dr. Locke is Past-President of the Southern Division of College Band Directors National Association and hosted the Southern Division Convention at UNCG in February 2000. In 2002, Dr. Locke was nominated for the O. Max Gardner Award, the highest award in the 16-campus UNC System. He also received the “Outstanding Music Teacher Award” in the UNCG School of Music in 2003. In 2005, Dr. Locke was elected President of the American Bandmasters Association and received the Albert Austin Harding Award from the American School Band Directors Association. In 2007, he received The Old North State Award from NC Governor Mike Easley “for dedication and service beyond excellence to the state of North Carolina.” In 2009, Locke became Editor of the Journal of Band Research, the premiere scholarly band publication in the world begun in 1962. In July 2012, Locke was honored by NC Governor Beverly Perdue with The Order of the Longleaf Pine Award, the highest civilian honor in North Carolina. In 2014, Locke was named the Marion Stedman Covington Stedman Distinguished Professor of Music at UNCG. At UNCG, Dr. Locke is the founder and director of the Summer Music Camp program, now the largest university music camp in America, enrolling over 2,000 students annually and served by a staff of 170 professionals. He is also the founder of the Carolina Band Festival and Conductors Conference. Since 1977, he has administered summer music camps for over 65,000 students. He is in constant demand as a guest conductor, clinician, and adjudicator for band festivals throughout the United States and Canada. 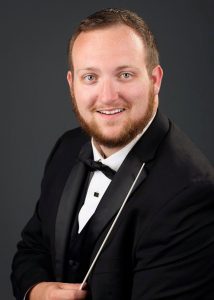 Aidan McManis is pursuing his master’s degree in orchestral conducting at the University of North Carolina at Greensboro, studying with Dr. Kevin Geraldi and Dr. Jonathan Caldwell.

Aidan holds a Bachelor’s degree in Music Theory and Composition with an emphasis in Orchestral Conducting from East Carolina University. While at ECU, he studied conducting with Dr. Jorge Richter, and double bass with Leonid Finkelshteyn and Dr. Chris Buddo. Aidan regularly guest conducted the East Carolina University Symphony Orchestra and other ensembles, and premiered several works by student composers. As a high school student, he attended the University of North Carolina School of the Arts, where he briefly studied conducting with Stephen Mulligan and double bass with Paul Sharpe.