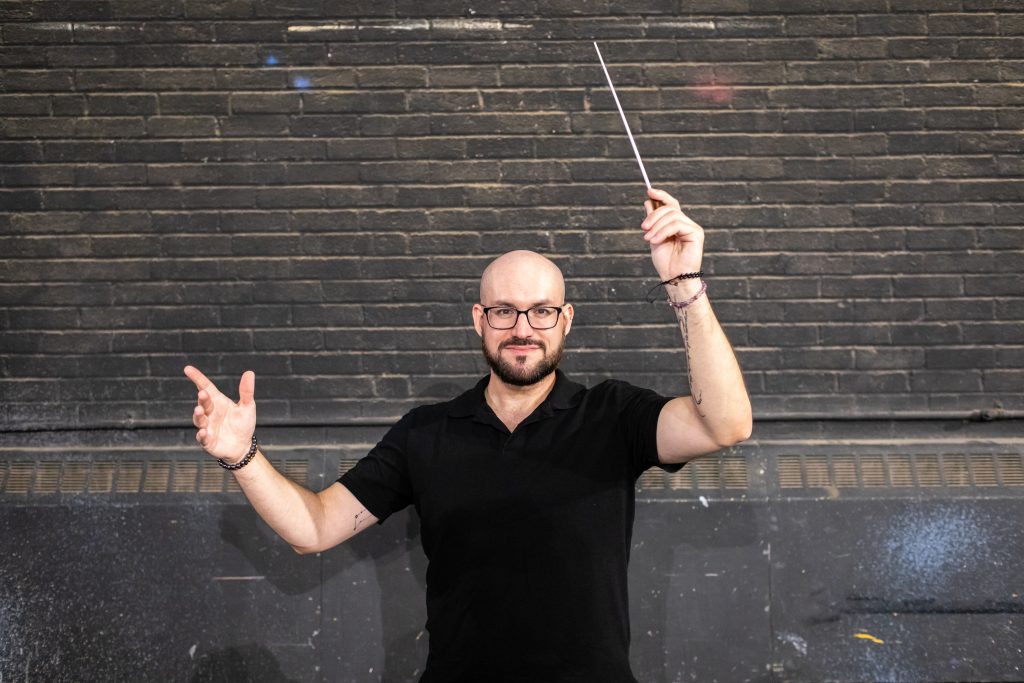 Kevin Lawson jokes that it took him twenty years to go zero-point-four miles—that’s the distance from the Music Building to Taylor Theatre—from a freshman piano performance major to the School of Theatre’s first MFA student with a concentration in Musical Theatre Directing—with a lot of stops along the way.

Lawson first enrolled at UNCG in 2002. He discovered that he enjoyed musical theatre more than any other genre of music and began playing for shows at the University. That led to almost constant work with theaters around the Triad, which caused him to pursue a dream:

“I was getting so much freelance work, and it was the direction that I wanted to take. I moved to New York with a dream many of us have—that I was going to work on Broadway.”

Lawson was successful in finding work as an accompanist for auditions and readings for new shows, and he did vocal coaching. He also worked as a music director at an off-Broadway theater and did regular stints out of town at regional theaters. When a more permanent opportunity presented itself, he moved cross-country to become the resident Music Director for a theater on California’s central coast:

“It was called ‘The Great American Melodrama,’ and oh boy it was! We did musical theatre shows and also parodies on the shows. It was great fun in that I got to create and perform some original work with the ensemble.”

While in California, Lawson began taking classes at a local community college and finishing up general education courses that he needed to complete his degree from UNCG. And then, his path took another turn:

“I decided to hike the Camino to Santiago, a network of pilgrimages in northwestern Spain. The trail took about a month, and after that I just stayed another month living the backpack lifestyle in Spain and Portugal. I was taking time to do that discover-yourself thing, letting go of things that are obstacles in your life. I started getting my own voice as a writer and began composing a show about my journey, my camino. I started thinking about getting back into theater as a writer.”

But there would be yet another twist in the path. Lawson joined the Peace Corps and served for almost two years in Ukraine as a Youth Development Director. When the pandemic struck, he and over seven-thousand Peace Corps workers were suddenly evacuated, and Lawson found himself back in Greensboro:

“Everything was shut down. No one was doing theater at the time. So I continued in this humanitarian lane, doing work with the Peace Corps in its domestic response to the pandemic. The Peace Corps had partnered with FEMA, and I got sent to Las Vegas to do vaccination awareness. After that, I worked with the International Rescue Committee to help settle Afghan refugees in different parts of the United States. During that time, I started looking at grad schools.”

Lawson was considering a composition degree and realized that he was looking for something that felt familiar:

“UNCG just felt right. I had this sense of returning home. I knew the composition faculty and the theater faculty from my time here before. I knew Dominick Amendum—he and I both studied under Dr. Joseph DiPiazza when we were undergraduates—and as luck would have it, just as I was exploring an MFA, I learned the college was starting this new degree concentration.”

Dominick Amendum, Coordinator of the Musical Theatre program, had teamed up with Collaborative Piano Professor James Douglass to create a curriculum that blends conducting, accompanying, and directing courses from the Schools of Music and Theatre. After spending nearly a decade with Wicked on Broadway and on national tour, Amendum will be training the next generation of Broadway music directors (MDs), and Lawson says he’s excited about the mentorship:

“I hope to draw on Dom’s experience as an arranger, a conductor, a musical supervisor, and a performer. I’m hoping to become an even more well-rounded musician and to strengthen my theater side and grow as a composer. A university is a wonderfully safe place in which to explore. I’d love to leave school with my musical being in a fuller state, get it to the point of being workshopped and ready to pitch to producers. Here we have actors, musicians, and dancers who are open to performing new work and they provide so much creative energy, and I’d love to use that to get my own personal work done.”

Lawson plans to make this a two-way street:

“As many things as I’ll take from being in this program, I think that I have some things to offer as well. I think it’s probably an asset that I have some life experience. I’ve done a lot of musical theatre direction, so I bring some knowledge about what an MD is actually going to need in the field. These kinds of programs are few and far between in universities. It’s such a unique skill set. For so many it’s a trial by fire. They have great music training or great theater training but when they go to direct their first musical they really aren’t sure what to do. And now, here at UNCG there’s an actual course of study. I’m excited to be part of building it as we go!”

The fact that the arts are combined into the College of Visual and Performing Arts at UNCG was also a plus for Lawson in choosing a graduate program for his next step:

“Collaboration is essential to a working artist today. You see this crossover happening so often now—art, dance, opera, theater, film —all of it. When I was here before, the schools were so separate. You didn’t see anyone in the music building who wasn’t a music major. But, a classically trained musician can be completely employable in a Broadway pit, and there are musical techniques that every theater performer needs to have.”

Looking at his schedule, Lawson says he’ll spend almost as much time as a teacher as a student, and he’s happy about that:

“I’m the Teaching Assistant for the Musicianship Class, the accompanist for the Senior Musical Theatre Studio, and I have private lessons. I’m also the Music Director for the fall musical, Andrew Lippa’s The Wild Party, which opens November 11th in Taylor Theatre. I have so many opportunities and projects, and I’m just happy to get back to the piano!”

Get Tickets to The Wild Party.

Learn more about the UNCG School of Theatre.