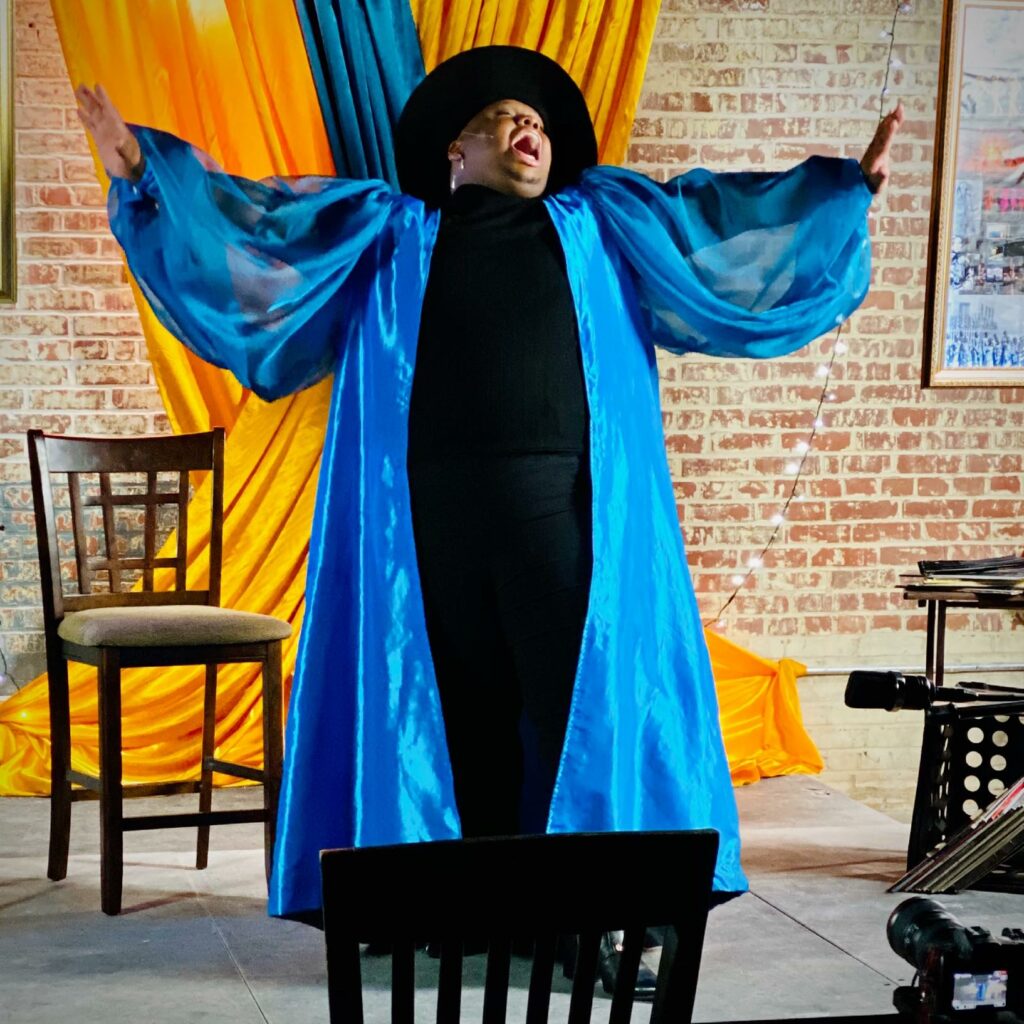 It all started in kindergarten. Five-year old Jordan Speas walked into his music class, struck a pose, and joyfully and loudly announced, “This is where we come to sing!”

And now, many school years later, Speas is still singing. And dancing. And acting. The spark that started in elementary school has grown stronger with each passing year:

“When I was ten I discovered that Broadway is an actual career, and I started watching every musical theatre video I could find on YouTube. When my school saw a ballet performance, I visited the company website daily to pore over the dance photos. When I was twelve, I lied about my age so that I could join the teen theatre ensemble of the North Carolina Black Repertory Company.”

Speas started college as an opera major at the North Carolina School of the Arts, but decided he needed more acting training and he wanted to do musical theatre instead. He took a gap semester to figure out what was next. During that time, he did a local production of Once on This Island, where he made some UNC Greensboro connections:

“One of the female leads, Victoria Pittman (’17 BFA Acting), blew me away! When I talked to her about UNCG, I knew that’s where I belonged. Of course, that’s what my mother told me from the beginning. But, it wouldn’t have been the same. I needed that space and time to really appreciate what I would gain here.”

Speas says: “UNCG didn’t limit me. They let me figure it out. No one told me, ‘you’re this or you’re that.’ They asked me who I wanted to be as an artist, and how I wanted to get there. The School of Theatre helps a student develop into who they want to be, not only as an artist, but as a human being in the arts.”

Of all the shows, classes, and workshops, Speas says the most memorable experience was performing the role of the Leading Player in Pippin:

“I always felt that I should never be able to play that role because of my physique. I’m not a Type A dancer. I’m not built like Ben Vereen (who originated the role on Broadway). But I knew I had it in me. I also knew I had to use every tool that I had gained from my time in this program: vocal and movement training from Erin Speer and Dominick Amendum; acting technique from Jim Wren and John Gulley; acting for the camera from Michael Flannery’s classes. I drew from them all. People think musicals are easy but they flex so many artistic muscles at once.”

Speas’s artistic muscles rarely take a break. He just finished taping an original work with fellow theatre students. I “Actually” Have Something to Say” will stream later this month:

“It’s the story of my educational journey through the last five years, two schools, and the songs that got me through. It’s about me discovering my voice in spaces that institutionally and systemically might have silenced me.”

He has also been involved in the on-campus club Triumph Theatre; he was a founding member of Adynaton Productions, a film company with fellow theatre students; he served on the UNC Greensboro Concert and Lecture Series committee, the School of Theatre’s Scaffolding Change Committee, and the search committee for the recent hiring of School of Theatre Director Natalie Sowell. He also worked with Elsewhere Museum in downtown Greensboro on the Black Creatives Revival, a recent series of both virtual and face-to-face, socially distanced gatherings “to centralize Black artists and art leaders in order to connect, build community, centralize Black power, and strengthen arts communities.”

Speas has also served as a Student Ambassador for the College of Visual and Performing Arts since the program began three years ago. He says he loves giving tours and advice to prospective students:

“I tell them to make the experience what they want it to be. If something’s not working for you, don’t just sit there and complain. Get your hands dirty and re-work it. You pay to go to school, but you have to invest beyond that initial payment of tuition. I also tell them to don’t make this choice lightly. Look at all of your options and pick the place that feels most like home because when things get daunting you’re going to need your community. If this place doesn’t speak to your heart then it’s not the place for you.”

Speas plans to stay in the area for six months after commencement, continuing to save money for a move to New York. As part of the BFA program, he has a reel that will be shared with casting directors, agents, and others in the industry, and he says he’s already got an audition in the works for a show that is being developed for Broadway:

“This career path isn’t easy. It takes skills, stamina, and heart. Words cannot describe how connected I am to this work. When most people graduate, they see it as a moment of moving into adulthood. Because of all the muck that I went through to get here to study as an actor, I feel like I’m reclaiming all of those young dreams and goals that felt really far away and which now feel so very close. It’s a livewire feeling, and I’m buzzing just thinking about it!”