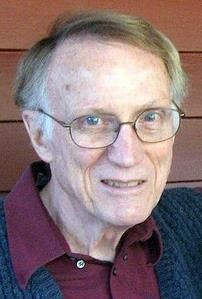 The School of Music was deeply saddened to learn of the passing of Dr. Richard Garner Cox (1928–2020), Professor Emeritus of Music. He is survived by Mary Alicia Cox, his wife of 61 years, and his children: Anna Cox Trude, David Cox, and John Cox, and five grandchildren.

Richard Garner Cox was born in Rocky Mount, NC on December 12, 1928 and grew up in Richmond, VA and Raleigh, NC. He earned a BA in Music at UNC-Chapel Hill and then earned a Masters and PhD in Music History and Literature at Northwestern University, where he met his soulmate Mary Alicia. He also studied at the Paris Conservatory.

Richard taught music at High Point College from 1953 to 1958 and was professor of music at UNCG from 1960 until his retirement in 2002. He served as choirmaster at Holy Trinity Episcopal Church for a half-century (1963–2013). Between 1970 and 2011, Richard wrote three books related to vocal and choral music, which continue to be used as references.

Richard also founded and directed the Bel Canto Company (1982–1987) and for many years guided choral preparation for the Greensboro Opera Company. He received numerous awards over the years, most recently the Arts Greensboro O. Henry Award (2014), and was inducted into the North Carolina Music Educators Association Hall of Fame the following year.

Impressive as his career achievements are, Richard’s greatest contributions were in his profound influence upon several generations of students, colleagues, and others. Within 24 hours of his passing, scores of eloquent tributes poured in. One former student wrote, “I am grateful every day to have had a mentor who put the music first – it was never about him—just the music and the singers; who supported equal rights and lived in a way that promoted social justice; and who supported and encouraged all of his students.” Another wrote, “I have had the privilege of knowing some incredible musicians in my lifetime, but I have never known a more consummate musician than Richard Cox. He simply was music and you could not help but be musical in his presence.” Another former student remembered that “in every rehearsal or service” at Holy Trinity, “Richard gave us the gift of his understanding, his devotion, and his love for this music, and the people of God whom it served.”

With Mary Alicia, Richard enthusiastically and lovingly participated in family life, and encouraged his children to be compassionate, thoughtful, and creative—qualities that he exemplified.

In reflecting upon his life recently, Richard wrote:

Finally, don’t grieve for me! I’ve had a really wonderful life. I’ve been blessed with an incredibly wonderful wife, who, in addition to taking care of me, has filled our home with beautiful and charming things, including herself. I’ve had intelligent, productive, and loving children who further blessed me with terrific spouses and delightful grandchildren. I’ve spent my life among many of the world’s greatest composers, and I’ve had gifted and responsive students, many of whom went on to distinguished careers. What a life!

Gifts in his honor can be made to the Richard Cox Vocal Arts Scholarship Fund at UNCG (drhuskin@uncg.edu) or the Emergency Assistance Fund at Holy Trinity Episcopal Church (sarah@holy-trinity.com).