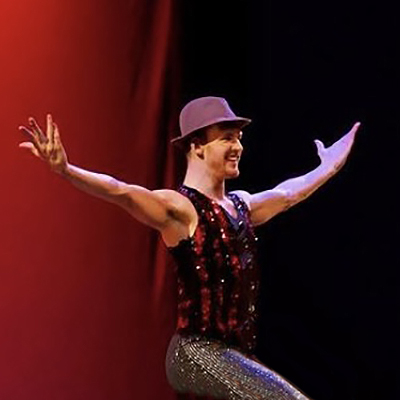 As a choreographer and a performer, Jacob Brown’s path has already taken some twists and turns, and he says he is thankful for the School of Dance’s faculty members who have been with him every step of the way:

“My professors have been my mentors, and now they will be lifelong friends and colleagues.  People like Duane Cyrus, Clarice Young, and Justin Turnow—they are the reason I know that coming to UNCG was the right decision.”

You might say Jacob made that decision twice. He came to UNC Greensboro from Seagrove, North Carolina as a freshman. He studied at UNCG for a few years, left the University to dance professionally in New York, then re-enrolled this year to finish his degree.  Even though he left his studies for a while, he says he feels like his professors never left him:

“I’ll never forget my last semester on campus before leaving town.  It was Fall of 2017: I had made the decision to move to New York and felt like the entire faculty of the School of Dance was completely on my side.  I really felt that when I left I was taking a little part of every professor with me.”

Since he’s been in New York, Jacob has spoken with his professors often and sees them when they visit  the City.  He says he reaches out to them often to get their advice or to update them on his career.  He says some of the choreographers he has worked with have also worked with his professors, making him realize the strong connection between UNCG’s School of Dance and the industry:

“Dance was the first thing that I found that really interested me enough to dedicate myself to entirely .  I found that same dedication in my professors.  My advice to future students is to take advantage of that.  Listen and learn: you are in school, but you are already working in your professional career.”

Jacob’s career plans include continuing to explore dance opportunities in New York and possibly in Germany, and he’s considering continuing his education by pursuing a  master’s degree in pedagogy or dance theory.