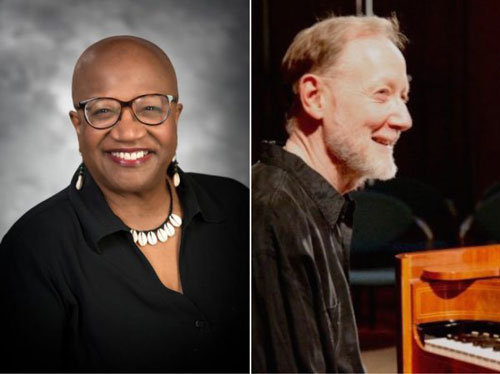 The UNCG School of Music is pleased to announce that Dr. Constance McKoy and Dr. Andrew Willis have been appointed Marion Stedman Covington Distinguished Professors in Music for a five-year term, effective Fall 2019.

Dr. Connie McKoy is Professor and Director of Undergraduate Studies in the UNCG School of Music, where she teaches undergraduate and graduate music education courses. She holds a BM in Music Education from the Oberlin Conservatory of Music and MM and PhD degrees from UNCG. She has 19 years of public school teaching experience as a general music teacher, choral director, and band assistant. Her research, which has been presented nationally and internationally, has focused on children’s world music preferences, music teachers’ cross-cultural competence, and culturally responsive pedagogy in music. In 2017, she participated in the Yale Symposium on Music in Schools and contributed to the resulting document, The Declaration on Equity in Music for City Students. Dr. McKoy is co-author of Culturally Responsive Teaching in Music Education: From Understanding to Application, published by Routledge. She is a past president of the North Carolina Music Educators Association, and is the Immediate Past Chair of the Society for Music Teacher Education, an affiliated society of the National Association for Music Education.

For several decades Dr. Andrew Willis has explored the historical development of keyboard instruments and their performance practice while maintaining a commitment to the study, performance, and teaching of the widest possible range of repertoire. Keenly interested in the history of the piano, he participates frequently in conferences, concert series, and festivals. A past president of the Southeastern Historical Keyboard Society and a Trustee of the Westfield Center for Historical Keyboard Studies, he served a finals juror of the Westfield International Fortepiano Competition in 2011. Dr. Willis teaches performance on instruments ranging from harpsichord to modern piano and since 2003 has directed the biennial Focus on Piano Literature symposium, for which he commissioned, premiered, and recorded Martin Amlin’s Sonata No. 7 (2000). He has recorded solo and ensemble music on historically contemporaneous pianos of three centuries for the Albany, Bridge, Claves, Centaur, and CRI labels, with collaborators including Julianne Baird, soprano, Brent Wissick, cello, and Sue Ann Kahn, flute. His recording of Op. 106 for the first complete Beethoven sonata cycle on period instruments was hailed by The New York Times as “a ‘Hammerklavier’ of rare stature.” Willis received the D.M.A. in Historical Performance from Cornell University, where he studied fortepiano with Malcolm Bilson, the M.M. in Accompanying from Temple University under George Sementovsky and Lambert Orkis, and the B.M. in Piano from The Curtis Institute of Music, where his mentor was Mieczyslaw Horszowski.

Marion Stedman Covington was born and raised in Asheboro, North Carolina, where her father was a textile manufacturer and founder of the Stedman Corporation. She spent most of her life in North Carolina, and it is in this area that she focused her generosity. Mrs. Covington had a long history of volunteerism and philanthropy in the fields of the arts, education, and historical preservation. She provided endowments and scholarships to colleges and universities throughout the state of North Carolina.