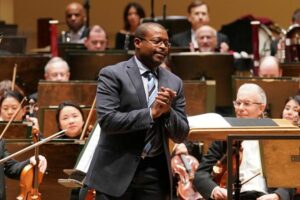 Called a “gifted young composer” (Cincinnati Enquirer) whose “bright, pure music” (Washington Post) is “tonal but highly complex” (South Florida Classical Review) and “vibrant [and] richly layered” (Baltimore Sun), James Lee III composes in every medium ranging from orchestral and band works, to chamber ensemble, sacred choral and vocal pieces, and works for solo piano. Born in 1975 in St. Joseph, Michigan, he cites as his major composition teachers Michael Daugherty, William Bolcom, Bright Sheng, Betsy Jolas, Susan Botti, Erik Santos and James Aikman. As a composition fellow at the Tanglewood Music Center in the summer of 2002, he added Osvaldo Golijov, Michael Gandolfi, Steven Mackey and Kaija Saariaho to his roster of teachers, and studied conducting with Stefan Asbury. Premieres and performances of his music include Papa Lapa by the Detroit Symphony Orchestra, Thomas Wilkins conducting, in 2001; the premiere of Sympathy, for flute, percussion, harp and chorus, given by the Leigh Morris Chorale in St. Paul in 2002; and A Place for God’s People, an orchestral work premiered at Andrews University in 2002. In 2002 Dr. Lee had two premieres at the Tanglewood Music Center in Lenox, Massachusetts. Those premieres included The Appointed Time for string quartet and Psalm 61 for members of the Boston Symphony Chorus.Through the Eyes of Time for orchestra was commissioned by the Alabama All-State Festival Orchestra and introduced in Mobile under Anthony Elliott in 2004. Recently, Maestro Leonard Slatkin has begun to champion Dr. Lee’s work.