Hosts and Artist-Instructors: Ashley Barret and Michael Burns, Professors of Oboe and Bassoon at UNCG

Where: University of North Carolina at Greensboro School of Music. Online and virtual. Weblink will be sent to registered guests.

Who: any oboe or bassoon player (beginner, intermediate, advanced divisions)

This is a really great event to come learn more about the double reed instruments, play some games and have fun and get to work with some AMAZING Guest Artists and UNCG Faculty members!

Register for the 2022 Double Reed Day 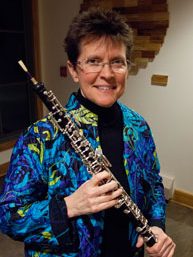 Mary Ashley Barret is the Professor of Oboe at the University of North Carolina at Greensboro and has been on the faculty since 1998.  A native of Charlotte, she holds the principal oboe position with the Greensboro Symphony Orchestra in addition to being a frequent performer throughout the southeastern USA.  She has appeared as soloist with the Salisbury Symphony, the Florida State Wind Orchestra, the UNCG Orchestra, Symphonic Band, and Wind Ensemble, the Pottstown Symphony Orchestra, and has presented numerous guest recitals and master classes throughout the United States, Caribbean, Central America, Canada, Germany, China, New Zealand and Australia. Barret performs regularly with the Greensboro Symphony Wind Quintet, the EastWind Trio d’Anches, the EastWind Ensemble, and has spent several summers playing chamber music in the Adirondacks of New York.

Some highlights of her career include co-hosting the International Double Reed Society’s 32nd annual conference in 2003, a Carnegie-Hall recital debut with the EastWind Trio d’Anches in 2005, a ten-day recital tour to China with the EastWind Quintette d’Anches in 2008, the Brevard Summer Music Festival of 2010, and as the headline master teacher for the NC Bocal Majority/Operation O.B.O.E summer camps since 2014.  Barret’s degrees include the Doctor of Music from Florida State University, the Master of Music from Baylor University, and the Bachelor of Music from the Eastman School of Music.  She can be heard on Live from Luzerne recordings with the Luzerne Chamber Players (NY), Out of the Woods, French reed trio music with TreVent, The Russian Clarinet (with EastWind Trio d’Anches), EastWind Trio d’Anches Looks East (Reed Trios of Eastern Europe), Chamber Music of Samuel Coleridge-Taylor (pub. by Centaur Records).  Barret’s research focus has been recording music by women composers, the first CD of which was released Spring 2012, published by Centaur Records.  Currently she is working with the Women’s Wind Ensemble and will be producing a concert series promoting the winning composers from the Women of Note Composition Competition. Barret is an artist/clinician for Buffet Group USA.  mabarret@uncg.edu 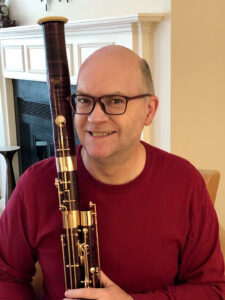 An active performer, Burns enjoys roles as a soloist, in chamber groups, and orchestrally with numerous recent performances at International Double Reed Society conventions, recitals and masterclasses throughout North America, Germany, Italy, China and the South Pacific. He performs as principal bassoon with the Asheville Symphony and the North Carolina Opera and as bassoonist in the EastWind Ensemble and Blue Mountain Forecast.

He also performs regularly with regional groups such as the Greensboro, Charlotte, and North Carolina Symphonies and as a guest with the Ciompi Quartet and Mallarme Chamber Players.

He has recorded for the Centaur, CAP, Telarc, EMI, Klavier, and Mark labels and his solo CD Primavera: Music for Bassoon and Piano by Bassoonists, was released to critical acclaim on the Mark Masters label. A new CD Glass Ghosts is scheduled for release in 2021. Burns is a Moosman Artist/Clinician and plays on a Moosmann 222CL 5SC Thin Wall bassoon.

Burns’ primary position is as Professor of bassoon at the University of North Carolina at Greensboro. In summers, he has been associated with several Festivals including the Clazz International Music Festival in Tuscany, Italy, Eastern Music Festival, The Summer Bassoon Extravaganza, Music for All/Bands of America Summer Symposium, the Affetti Festival, New England Music Camp and the Bocal Majority and Operation O.B.O.E.

Prior to accepting the position at UNCG, he also taught at the Cincinnati College-Conservatory, Indiana State University and Midland College.

He is an active composer with many of his pieces being published by TrevCo Music, Potenza Music and Effiny Music and frequently performed internationally. https://michaelburnsbassoon.com 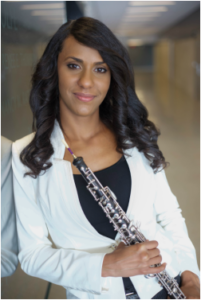 Nermis Mieses is the Associate Professor of Oboe at Bowling Green State University in Ohio, Principal Oboe of the Michigan Opera Theatre in Detroit, and Chair of the Gillet-Fox International Competition for Oboe. Her distinctions include being the first American to place as finalist in the prestigious Barbirolli International Oboe Competition held in 2014; first place at the 2011 First International Oboe Competition in Santa Catarina, Brazil; finalist at the 2018 Matthew Ruggiero International Woodwind Competition; and second place at the 2012 Society for Musical Arts Young Artist Competition in Ann Arbor, MI. The University of Michigan School of Music Theatre and Dance Alumni Society conferred her the 2020 Paul Boylan Award. She has appeared in solo performances with the Puerto Rico Symphony Orchestra, Michigan Philharmonic Orchestra, and toured Denmark as soloist and chamber music performer with the Thy Chamber Music Festival (2011, 2013). She has presented multiple masterclasses and recitals in Florida, Arizona, Iowa, Texas, Michigan, Nebraska, Washington DC, Indiana, Ohio, New York, Georgia, Wisconsin, Spain, Puerto Rico, and Dominican Republic; some as part of the IDRS annual conferences. Formerly principal of the Michigan Philharmonic, she has also performed with the Ann Arbor, Sphinx, ProMusica Chamber, Rochester, Lexington, and Puerto Rico Symphony as well as the National Repertory Orchestra, Sewanee Music Festival, Idyllwild Arts and FOSJA. She holds D.M.A. and M.M. degrees from the University of Michigan under Dr. Nancy Ambrose King. 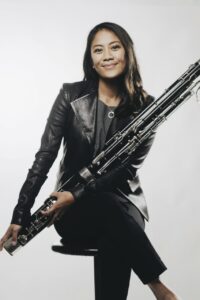 Marissa Olegario is Assistant Professor of Bassoon at The University of Arizona Fred Fox School of Music. Known for her compelling and personality-driven performances, she enjoys an active and diverse performance schedule as a soloist, chamber, and orchestral musician. Marissa has appeared in concerts at Avery Fisher Hall, Carnegie Hall, and the Kennedy Center under conductors such as James Conlon, John Adams, Peter Oundjin, Rafael Payere and Leonard Slatkin. Interested in interdisciplinary work, Marissa has collaborated with the Martha Graham Dance Company, commissioned lighting designs for performances, and partnered with Dance for Parkinson’s to provide live music for people suffering from Parkinson’s disease. Constantly seeking new artistic possibilities, Marissa has premiered works by Jay Vosk, Szilárd Mezei, and Shuying Li and has commissioned new works by Shuying Li, Sarah Gibson, Yuanyuan (Kay) He, and John Steinmetz.

Marissa was a semi-finalist for the 2016 Matthew Ruggiero International Woodwind Competition and was recognized as a recipient of the Yale School of Music Alumni Prize. An active chamber musician, she has appeared at the Phoenix Chamber Society Winter Series, the Norfolk Chamber Festival, and the clasclas festival in Spain where she performed with former concertmaster of the Berliner Philharmoniker Guy Braunstein. She actively subs with the acclaimed Breaking Winds Bassoon Quartet and is a member of the Arizona Wind Quintet, resident faculty quintet at the Fred Fox School of Music. She can be heard on two Naxos produced albums: Beethoven: Music for Winds featuring David Shifrin, Stephen Taylor, Frank Morelli, and William Purvis and A Vision of Time and Eternity: Songs and Chamber Music, featuring unrecorded works by Welsh composer William Mathias.

As the 2017-2018 Orpheus Chamber Orchestra Performance Fellows, Marissa participated in the organization’s program which provided mentorship and professional development for emerging artists from underrepresented backgrounds. Marissa acknowledges the systemic inequity in the classical music industry and recognizes her essential responsibility as an educator to actively work towards enacting change. She programs, commissions, and premiers works by female, BIPOC, and historically underrepresented composers and works to elevate the ideals and perspectives of the diverse groups of people who contribute to the industry.

A graduate of the Yale School of Music (MM) and Northwestern University (BM), Marissa’s major teachers are Christopher Millard, Lewis Kirk, and Frank Morelli. She regularly presents master classes and performances at universities and performing arts schools around the United States.

The UNCG Virtual Double Reed Day 2022 would like to thank our wonderful vendors/sponsors for their generous support. Please visit their websites for all of your Double Reed supplies!