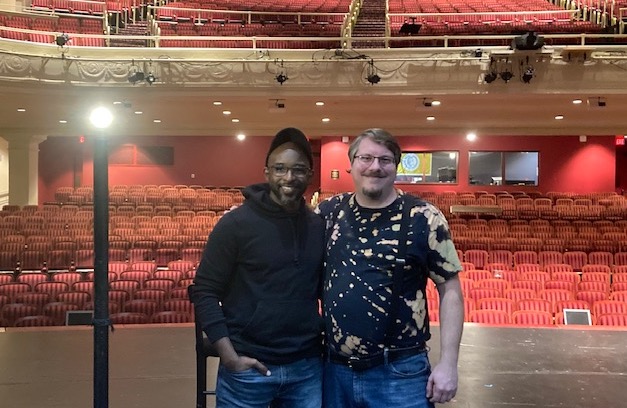 Walk into the UNCG Auditorium and you will likely be struck by the beauty of the Art Deco interior—the red-and-gold color scheme and the reconstructed original chandelier. You might enjoy a performance of music or theater or perhaps a lecture by a luminary of the stage or screen. But there is so much more to the Auditorium than what meets the eye. To see it all, you must travel two stories down to the basement and more than 60 feet up to the attic, and for that, you will need a tour guide. Enter stage left: Auditorium Production Manager James Goins and Technical Director Scott Garrison.

We start in the basement.

Garrison: This is what we call “chairage” (like steerage). That’s because there’s a metric ton of chairs down here: extra seating for the Auditorium and chairs from the orchestra pit. If it’s a chair, it lives down here. (Garrison leads us through a sea of chairs and

work carts and boxes full of tools and casters and lighting gels). And through this door is the monstrous mechanism that raises and lowers the orchestra pit. Don’t worry, you’d have to work really hard to get squashed, because there are all kinds of safety measures in place.

One floor up are the dressing rooms. Garrison’s office is there, too, where he shows us a row of original seats and a desk piled with old lighting plots. Then we head to the main level and onto the stage.

Goins (pointing upward at the flyspace): Everything runs on a counterweight system: it’s how we raise and lower curtains and lights and backdrops. You’ll notice there are a lot of ropes back here.

Back in the 1600s, the theater season coincided with the time of year when sailors had time off from ships and were hired to do backstage work because they had extensive knowledge of ropes, rigging, and knots.

In 2017 some of that rigging and the main curtain had to be replaced because a hot stage light caused it to catch fire.

Garrison: It was during the final dress rehearsal for the UNCG opera. My wife and I had just gotten home from dinner, and I had just popped open a beer when I received the phone call. I tossed that beer at my wife and said “I gotta go, baby, my building’s on fire!”

I lived on Watson Street next to Firehouse Number 5, so I pulled out about the same time they did. When I got there the place was full of smoke, and everything was covered in an inch of residue from the fire extinguishers. Everything had to be hand-wiped from the basement to the attic before we could reopen.

The tour continues up hundreds of stairs to the booth where the spotlights are operated. From there, up a ladder to the catwalk and attic and to where the Auditorium’s HVAC units are located. The stage looks small from this vantage point. Who are some favorite artists who’ve performed on that stage?

Garrison: Malpaso and Urban Bush Women were fun dance companies to work with on special lighting effects. Actor Winston Duke was such a nice guy—he stayed for an hour after the show signing programs and taking selfies with students. Alan Alda was very generous with his time, too, signing his books.

Goins: Rhiannon Giddens is such an amazing talent, and we feel like she’s “ours.” Tony-Award-winning actress Kelli O’Hara is just such a pro and what a voice—it was a great experience running sound for her. In terms of overall personalities that have come to this space, we find that they all just seem to relax here.

Goins and Garrison make sure that all the artists get what they need while they are in the Auditorium. That includes meals and dressing room requests, which could be anything from steamers and electric tea kettles to gluten-free icelandic yogurt, maroon-colored hand towels, and sometimes even liquor.

The duo also makes sure that patrons and clients are well-served.

Goins: A couple of years ago, there was a group of students who organized a post-show reception. They accidentally told catering that it was in the Elliott University Center Auditorium, and all the food went there. By the time the mistake was realized and catering made it over to UNCG Auditorium, the lobby was packed with people, and catering couldn’t get their carts through the lobby. Our staff picked up trays and carried them over their heads through the crowd and got the food delivered downstairs for the reception, so there was no delay. We feel like when it comes to the UNCG Auditorium, it becomes our responsibility.