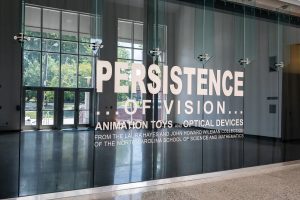 It’s a moving art exhibition—literally—to coincide with the School of Art’s forward motion in launching a new BFA degree concentration in Animation.

Running August 10th through September 27th in the gallery of the Maud Gatewood Studio Arts Building, Persistence of Vision features more than twenty-five beautifully preserved animation toys and optical devices on loan from the Laura Hayes and John Howard Wileman Collection of the North Carolina School of Science and Mathematics (NCSSM).

UNCG Art Historian Heather Holian says the toys are among the earliest preserved examples of animation and reflect the framework for the medium as we know it today. But, she says, animation didn’t begin just as entertainment:

“What’s interesting about these toys is that many of them were developed as science experiments. Physicists were exploring questions like why a fast moving carriage wheel appeared to be spinning forwards, backwards or standing still when you’re looking at it through the verticals of a fence or railing. Then in 1824, Peter Mark Roget (famous for his thesaurus) wrote about this “persistence of vision,” which explains how our brains retain an image for a thirtieth of a second beyond when our eyes actually see it. Just that little bit of time allows animation to be possible.”

The toys and experiments in the exhibit date between 1825 and 1905, and Dr. Holian says they are still a delight to experience:

“Even after more than 100 years and the development of highly sophisticated forms of digital animation and effects, these Victorian devices have lost none of their fascination—from a gray tabby cat perpetually chasing a bird over the side of a phenakistoscope disc to a vase magically filling with flowers to a man repeatedly climbing a ladder to the moon, these objects continue to visually intrigue and delight. They also have the power to teach and help us unravel something of the time and place they were made, the people who made and bought them andthe science behind them.”

The timing of the show and the collaboration with NCSSM to bring the items to UNCG is not a coincidence. Assistant Professor of Animation Dan Hale says, “We are celebrating the birth of the animation program here at UNCG by exhibiting artifacts that represent the birth of animation as an artistic medium.”

The title of the show Persistence of Vision could also be used to describe what it has taken to bring animation to UNCG. Dr. Holian is a Disney and Pixar historian who has been teaching a class and bringing animation artists to campus since 2008. An animation program has been the topic of conversation and planning since 2012 by School of Art Director Chris Cassidy, former Chair Lawrence Jenkens (when the school was a department in the College of Arts and Sciences) and Dr. Holian. In 2020 Professor Hale was hired. And, this year for the first time, students will be able to choose animation as a concentration within the BFA in Studio Art.

By the end of the fall semester, the program is expected to have admitted a full first cohort of 20 students, and Professor Hale predicts that the demand will grow:

“There is profound interest among young people in animation. Ask anyone between the ages of 12 and 18 and they will readily identify their favorite animated series and tell you why. So what is it about animation that they connect with? I think it’s this idea that you can tell any story through animation. You’re not restricted to the look of the actors or the location. You can create anything your mind can conceive. I think that’s one of the things that draws students into this medium. And, the career paths are more than just cartoons—there is animation in documentaries, training videos, tutorials, and then there’s the gaming industry, which is taking off.”

Dr. Holian adds, “In a modern or contemporary school of art, animation is essential. The value is incalculable to our students. It moves our School forward. Animation brings together every one of the traditional art forms that we are familiar with and then takes it beyond that. It also allows artists to bring in their own voices in very profound ways and allows for collaboration which is so important for our artists, especially our young artists.”

Collaboration is essential to the exhibition and the program, says Dr. Holian:

What excites me about this project is that it brings together two UNC system schools. It brings together a university and a high school. And it is bringing together different areas of our campus including Dr. Promod Pratap as our Physics Consultant and Co-Collaborator.” Professor Hale adds, “ We also look forward to working with other areas of the College of Visual and Performing Arts on topics such as music soundtracks for animation, acting coaching for students developing characters, etc.”

The two professors will lead different areas of the program. Dr. Holian’s “Art of Disney and Pixar” is a 200-level class without prerequisites and brings students from all over the university to the School of Art.

“It’s a crowd-pleaser,” Holan says. “I like to think it’s a way to introduce students to Art History through a medium they enjoy and through films they know and have a connection with already. My other classes focus on the ancient Romans through the Renaissance, and no one just stumbles into those classes. Interesting similarity though—in Renaissance art and in animation, collaboration is key. Although we center on a single artist genius, all of them had workshops. The modern animation studio is an extension of the workshop system.”

Dr. Holian also teaches a 300-level class focusing on the work of women in animation. Conversely, Professor Hale’s classes focus on the making of animation.

“I say ‘Great. You watched all the Disney films growing up and now you want to learn how to make it? Well strap in because you have to draw 12 pictures to have one second of animation.’ I teach them how to create their own work. We start with animation analysis. We study techniques then incorporate them into our own works. Basic concept art. Stop motion animation. Hand drawn 2D animation. Computer generated 3D animation. From there, they choose their direction to finish up the degree.”

“Our students will really benefit from having animation and art history side by side’” says Dr. Holian. “That’s not something you’re going to get at a conservatory or a school that is not a broader university that has humanities education as central to the arts. I think our animation program will thrive really well under these circumstances. This program benefits from being in a College of Visual and Performing Arts and from being in a research university.”

Professor Hale says animation students will also benefit from being in a School of Art where there is a focus on the foundations:

“Our foundation courses are so robust. There is an emphasis on slowing down and learning the art of observation. Our students experience a wide range of media—like painting and sculpture—which are all important to animation. You can’t animate a human if you can’t draw a figure, and you can’t create 3D animation if you don’t understand the volume of sculpture.” Professor Hale explains the deeper purpose of concentrating in animation:

“I think students will leave this program with skills to succeed. But I think if you only focus on the skills you lose the “why.” Why are you telling this story? If you haven’t had a class in Greek literature and you haven’t read the Odyssey how are you going to tell a really great adventure story? It’s that kind of understanding and expansion of the mind that’s so important to storytelling. It’s not just about drawing the best picture. If we wanted that we’d just go make a photograph. It’s about taking all of these narratives and crafting something that connects with other people. You need that broad understanding to be effective, and that’s what students will get here.

For more on attending Persistence of Vision

For more about the BFA in Studio Art concentration in Animation

To donate to the School of Art