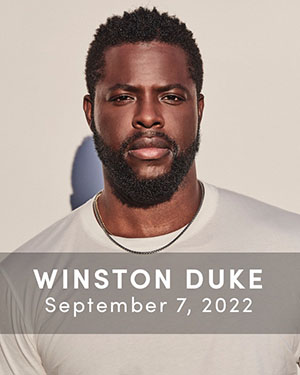 Marvel Studios is taking fans back to Wakanda in the Black Panther sequel this fall, but before the film’s release, the UNCG Concert and Lecture Series (UCLS) is bringing one of the stars of the film to campus.

Actor Winston Duke who has played M’Baku in the previous three previous Black Panther films and the upcoming Black Panther: Wakanda Forever, will speak and take part in a moderated Q&A in UNCG Auditorium on August 26th. The appearance will also include a curated collection of performances by students in UNCG’s College of Visual and Performing Arts.

“Winston Duke’s body of work speaks for itself. From the Black Panther films to Avengers and the blockbuster horror film US, he has captured the minds of movie fans around the world. His training began with a BA in Theatre and an MFA in Acting, just like so many of our students in the UNCG School of Theatre. Beyond getting to hear Mr. Duke speak, our students will be able to participate in an event just for them.”

In addition to public presentations, every artist in the UCLS series has important interactions with UNCG students, such as holding masterclasses and seminars, often just hours before appearing on stage. A native of Trinidad and Tobago, Duke received his Bachelor of Arts in Theatre at the University at Buffalo and Master of Fine Arts from the Yale School of Drama.

“Our students will get to talk with Winston Duke about his training, his path to success and celebrity, and get his feedback on their work.  This experience is invaluable and speaks to the importance of this series on our campus,” adds Amendum.

Winston Duke made his feature film debut in Black Panther, the highest-grossing film of 2018, as well as the third-highest-grossing film ever in the United States. He played fan-favorite M’Baku for which he received an NAACP nomination for Breakout of the Year. Duke reprised the role in Avengers: Infinity War and Avengers: End Game.

Black Panther:Wakanda Forever will be released on November 11th. In a recent interview with Collider.com, an entertainment website and digital video production company with a focus on the film industry, television series, and video games, Duke talked about M’Baku’s journey in the upcoming film:

“Now we get to see how he figures out a brand-new world for Wakanda; a brand-new world like we’ve had to experience. A world post-COVID; a world post-pandemic or mid-pandemic. Much like us, he’s going through a lot of the same things and figuring out how to move forward. This movie really deals and dives into that a lot.”

Duke most recently starred alongside Mark Wahlberg in Peter Berg’s Netflix crime drama Spencer Confidential. Other film credits include Jordan Peele’s US for which he received an NAACP Image Award nomination for Outstanding Lead Actor in a Motion Picture.

Duke’s other projects include Sony Picture Classics’ Nine Days, which premiered to rave reviews at the 2020 Sundance Film Festival. Duke not only plays the lead role but also served as an Executive Producer.

Outside of acting, Duke is an advocate for HeForShe, the United Nations Global Solidarity Movement For Gender Equality, the American Diabetes Association, and was recently named the first celebrity ambassador for Partners in Health, a nonprofit global health and social justice organization fighting injustice by bringing the benefits of modern medical science to impoverished communities around the world.