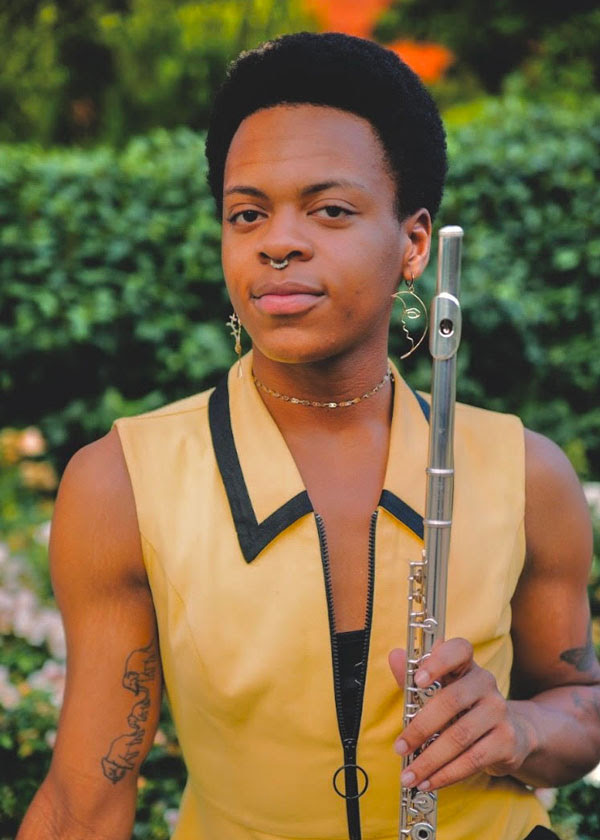 Kyrese Washington has played a number of instruments but has always come back to the flute:

“From the minute I picked up a flute in sixth grade band class, it just seemed easy for me to make music with it.”

Throughout middle and high school in their hometown of Raleigh, Washington played through the woodwind section—flute, oboe, clarinet—switching instruments with ease, depending on what the band needed. In eighth grade, they started taking flute lessons at the Community Music School. Even then, Washington was ready and able to play anything they were handed:

“I just wanted to play music all the time. I played saxophone with the Community Music School’s jazz band. I played at their donor events. Anytime there was a performance opportunity, I jumped on it.”

UNCG’s School of Music was one of Washington’s top choices. It only took a visit and a lesson with flute professor Dr. Erika Boysen for them to know this was the place:

“All of the flute professors I met were incredibly talented musicians. I started thinking about who I could see myself building a mentor relationship with. Dr. Boysen was the one I most connected with. I also talked with Dr. Kevin Giraldi about ensembles. I also wanted the opportunity to do performance and music education.”

Washington says they have grown as a musician during their time at UNCG:

“I had to learn how to prioritize and learn better time management skills—things that Dr. Boysen taught me in addition to helping me hone my musicianship. I feel like so much of my development happened at the very beginning of my time here and then at the very end. I have figured out that there is nothing else that gives me more joy than performing for myself and others.”  Listen to Kyrese playing “Summerland” by William Grant Still.

Washington says they came here wanting to teach but after a semester decided that performance was a path:

“Coming to college, I really found my sense of identity. I realized that I don’t really see people like me in band rooms. I felt like my kind of personality wouldn’t fit in that rigid structural setting of a band director. I do enjoy teaching and someday I might pursue the degrees I’d need to teach at a university. But for now, I want to explore being a performer.”

One of the pivotal moments in Washington’s college career came early on, during freshman year:

“I was honored to be chosen to play in Dr. John Locke’s retirement concert. I played piccolo for ‘The Frozen Cathedral,’ a piece written as a memorial to Dr. Locke’s son who passed away. There were so many times I listened to that piece and just cried. And then, there I was performing it with Dr. Locke right in front of me. I felt so many emotions and kept thinking don’t cry, you have to play and play the best you’ve ever played. That was so powerful.”

During their senior year, Washington received another high honor—winning the School of Music’s student artist competition:

“I’d applied every year. I placed in my sophomore and junior years but didn’t win. This year, when I advanced to the finals, I had never felt so confident about a competition. I practiced like crazy and I walked onto that stage feeling really good. And all the work I put into it paid off. That was such an amazing feeling, accomplishing that.”

Washington plans to take a gap year and then head to grad school. They’re looking at conservatories, but say they’re glad for an undergrad experience at UNC Greensboro:

“It’s been a great fit for me. The diversity is unlike anyplace else. In class and social gatherings, it’s so easy to meet people. And I’m so glad I came here because I got to learn from music education majors, composition majors, and arts administration majors. It really makes for a more well-rounded individual.”

As they take their next step, Washington has some advice for future Spartans:

“Be open to the idea that things will change during your four years of college. I’ve never been a big fan of change. But there will be change—maybe a change in your degree, changes in relationships, changes in what works for you. There are so many people here. You will always be able to find a group that values you. Embrace change.”