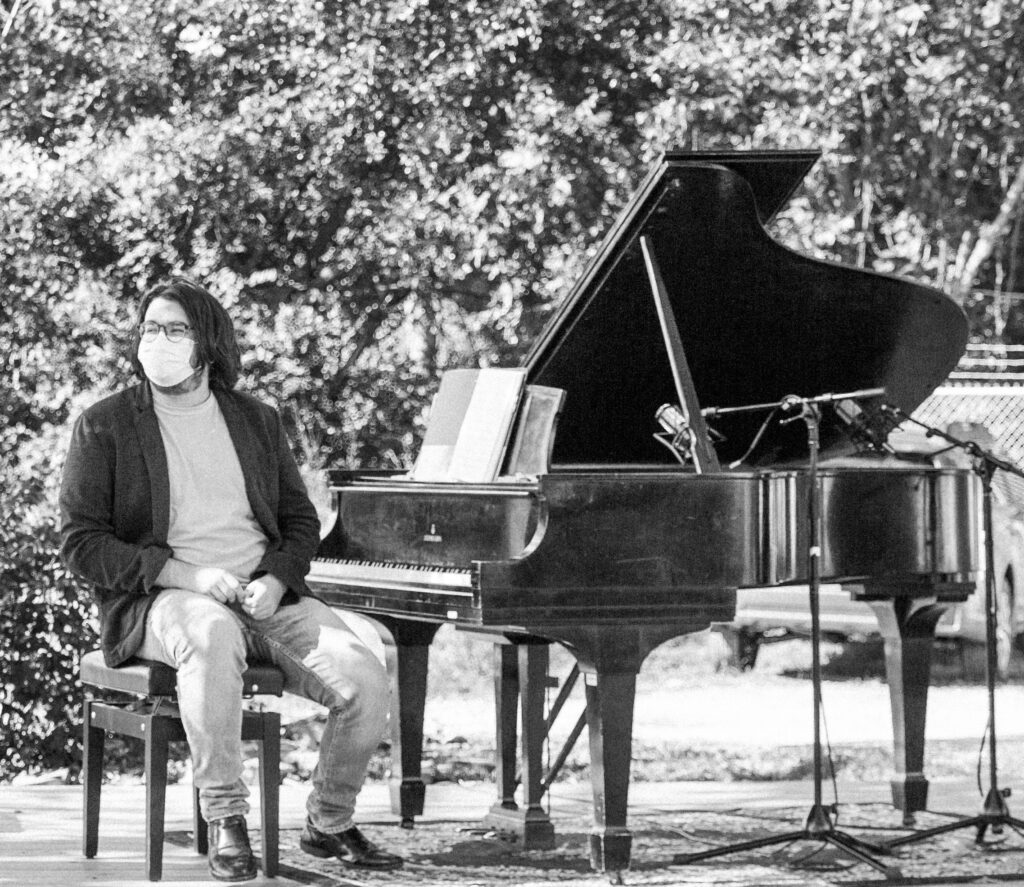 “I’ve always been interested in composition because I have this astonishment about how music is constructed. As far back as sixth grade band, after we played a piece in class, I would go home and look up the score online and listen to a professional recording and start to see how the notes came together to make a song work. That’s what drew me to writing music, and the more I did it, the more I loved it because it was a way to put myself in the music and create with others and for others.”

He also arrived here knowing exactly what kind of music he wanted to compose:

“I came to the School of Music with a niche interest which was writing for Musical Theatre. What I really liked about my professors, Dr. Mark Engebretson and Dr. Alejandro Rutty, was that they were so willing to help me carve out a path that included that. They respected that it held such high interest for me.”

Stryska says that as a first-year student, he asked his professors if he could write a musical for his senior recital. He says the response he got was positive:

“They said, ‘Why not write two? One can be your sophomore project, and the other can be your senior recital. I did, and both of them were created and performed as student-led productions.  Musical Theatre Artist-in-Residence Dominick Amendum provided me the opportunity to compose an orginial score for a School of Theatre mainstage production, The Witches, directed by MFA student Chad Parsons. I feel like I had my toes dipped in both Music and Theatre, and that collaboration offered at the College of Visual and Performing Arts is so important. Some of the people you work with here are going to become lifelong colleagues. I think that’s one of the reasons I like Musical Theatre. It’s because of the way arts overlap. You need music, theatre, dance, and visual art to create it. If you miss one, you don’t have a full product.”

Stryska says he felt supported in his plans to become a musical theatre composer, but that his training was not in any way limited:

“My professors helped me expand my palate. In addition to the musical projects, they gave me classical composition assignments where I would have to write for an ensemble so that I could work on my instrumental composition and digital music. They weren’t going to let me become pigeon-holed into just one kind of songwriting. It’s easy to churn out a style of music and wind up sounding like fifteen other people. They wanted me to find my own voice and figure out what I bring to the world that is uniquely mine.”

A New York native, Stryska moved to Charlotte when he was eleven years old. He says he started hearing about the School of Music early on:

“By the time I started looking for colleges, I’d had my eye on UNC Greensboro for a while. I knew it had a really respectable music program. When I started thinking about where I would apply, I would google “top music schools in the nation,” and UNCG’s School of Music would always be on the list and highly ranked.”

He says he was really sold when he auditioned and met the professors. And after four years, he says he’s further convinced that he picked the right school:

“You can love a place, but there are always those questions running in the back of your mind: ‘Am I in the right place? Am I doing the right thing?’ Then, at the end of my senior recital, I knew for absolute sure. I had spent a month with a wonderful cast and crew putting together a musical. There was so much work, and there was extra work because of COVID. But when I heard that final note and the applause, I had this overwhelming feeling of being in the right place, at the right time, doing what I was meant to do.”

In the fall, Stryska will attend New York University to pursue a Master of Music in Music Theory and Composition with a Concentration in Songwriting.

“After grad school I hope to begin a career in Musical Theatre. That’s the hope and the plan. In the meantime, I feel like I’m as marketable as possible. I can do piano accompaniment. I can do orchestration and arranging. I can do sound engineering. I feel prepared thanks to the program here. It teaches you how to come at things from multiple angles. Professors here don’t mold you as much as they sharpen you.”

And the teaching hasn’t all been about music:

“You’re going to make mistakes. Don’t strive to make mistakes, but get prepared for them and know how to process them. I came in as a freshman with an ego. I’ve learned it’s okay to be wrong. I also learned how to admit when I’m wrong. But even that’s not enough. You need to learn from your mistakes so you can grow as an artist. We are all works-in-progress.”