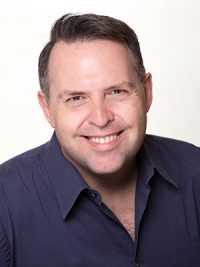 There’s nothing like a show on Broadway, and Hugh Hysell ’88 BFA likely had a hand in some of your favorites. The successful Tony Award winning actor, marketer, and producer has enjoyed a rich, varied career in show business – one he never imagined when he attended UNC Greensboro.

“I was looking for a theatre program that provided excellent performance training,” Hysell explains, “but I got so much more at UNCG. The faculty’s expertise with the job market, and the university’s liberal education, prepared me for the turns my career took.”

Such turns include: Hysell’s successful career with HHC Marketing, where he promoted more than 200 Broadway and Off Broadway shows and led Broadway Box to dominate all discount sales for the Broadway community; his establishment of TheMenEvent.com, the leading producer of LGBT social events in the nation; and his role as a founding member of the Off Broadway Alliance. Hysell now works as director of marketing for Broadway Records, a premiere record label in the industry that creates Grammy-winning Broadway cast albums and concert recordings.

None of this has kept Hysell from the stage and screen. His television credits include NBC’s “The Blacklist,” HBO’s “Divorce,” TLC’s “Suddenly Rich,” Amazon Video’s “After Forever,” and “Saturday Night Live.” He performed in “The All-Male Importance of Being Ernest” and “Villain De Blacks” in New York and has performed in countless Off Broadway productions in every state, thanks to regional productions and national tours. Hysell has also produced five successful Broadway productions, including “The Inheritance,” “Vanya and Sonia and Masha and Spike,” and “Peter and the Starcatcher.”

Hysell’s success has not gone unnoticed. In addition to his Tony Award, he has received two Drama Desk Awards, two Outer Critics Circle Awards, a Globes Award for “Best Small Budget Promotion in the World,” and a Gold Medal in Acting from the London Academy of Music and Dramatic Arts.

Hysell is grateful for the role UNCG played in creating the foundation for his successful career – so grateful that in 2020, he established a testamentary gift in the School of Theatre, now part of the College of Visual and Performing Arts. The Hugh Hysell Scholarship Endowment will support rising seniors majoring in theatre and provide critical professional development opportunities before they enter the theatre world. These development opportunities will be focused on non-performance professions including marketing, directing, and producing.

“The School of Theatre develops your passion,” Hysell says. “Passion for the craft, passion for the impact theatre has on individuals and communities. UNCG encouraged me to find and nurture my passion so I could enjoy every turn my career took. I hope this scholarship will help aspiring theatre professionals to explore all avenues of this art and embrace whatever road their career may take.”