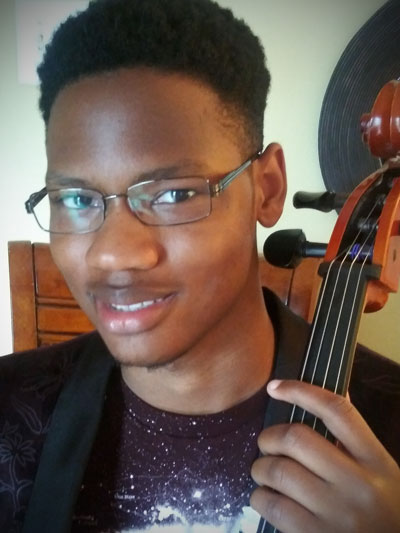 School of Music freshman Adam Jones (BM ’24, Cello Performance) was recently named a winner of the 2020 Musical Theater Songwriting Challenge from the American Theatre Wing and the National Endowment for the Arts. This national contest provides each winner with a two-person coaching team—a mentor and a music director—to hone an original song into a Broadway-ready composition. Each song is then recorded by Broadway musicians and vocalists in New York City, made available on streaming music platforms, and compiled into a songbook by Concord Theatricals.

Adam’s entry, “A Father’s Fear/Mardi Gras,” was chosen by review panels of professional theater artists in a blind competition from almost 200 applications from 41 states. He gives the following summary of his entry:

“The setting is 1940’s-early 1950’s New Orleans where a tall, well-dressed Black man named Quincy steps off a train. Quincy is from a well-off family in upstate New York that has roots in New Orleans. He has returned to the city with a sense of duty to serve as an educator for poor children there. The song starts with Quincy’s father, Robert worrying about his son’s safety in Deep South. As the music changes to a New Orleans jazz sound, Quincy gets caught up in a Mardi Gras parade that despite the festiveness, confronts him with racial realities and reflections.”

Now in its third year, the Songwriting Challenge is for students with a passion for songwriting and the wide range of musical styles represented in contemporary musicals. The goal is to engage the musical theatre field in nurturing the next generation of songwriters. Program collaborators are Disney Theatrical Productions, Concord Theatricals, and the S.O.N.G.S. Foundation of the National Music Publishers’ Association.

Adam Jones is a freshman from North Chesterfield, Virginia majoring in Cello Performance. He is a student of Dr. Alexander Ezerman. Among his many musical influences are Miles Davis, Quincy Jones, Stevie Wonder, John Coltrane, Leonard Bernstein, Esperanza Spaulding, and School of Music alumna Rhiannon Giddens, with whom he would like to someday perform.