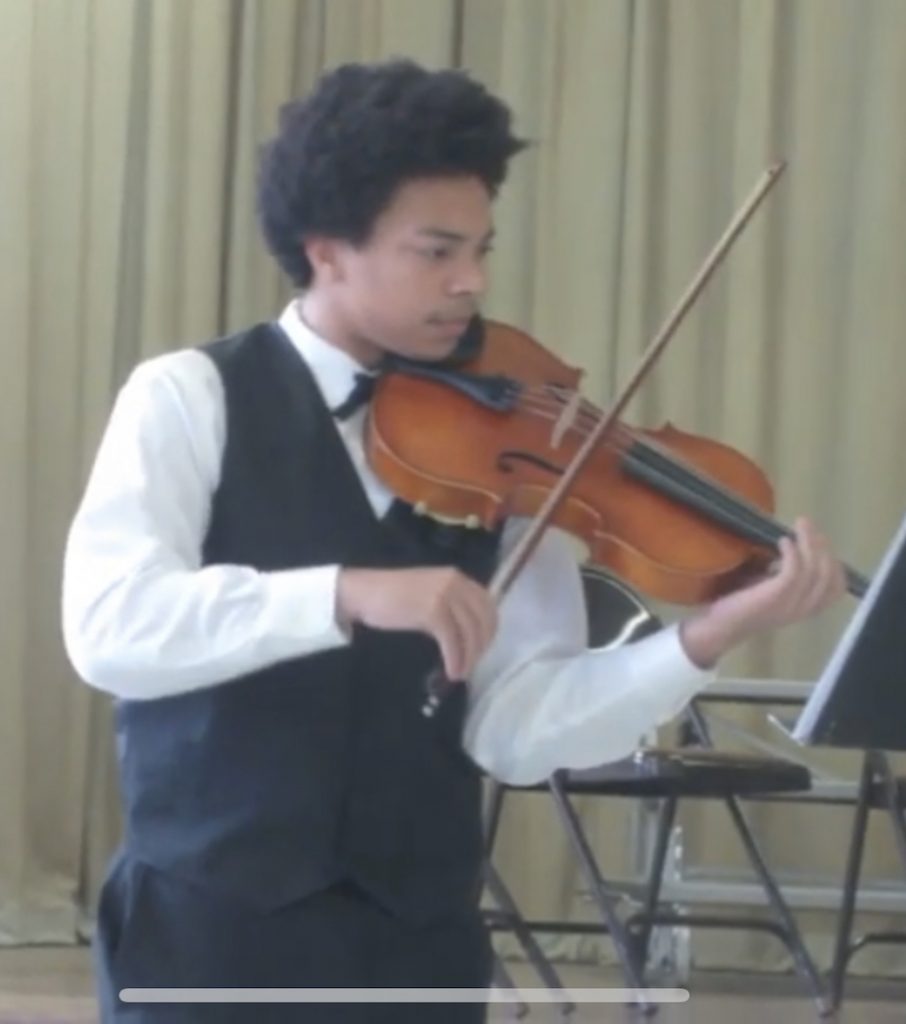 Triston Broadway knows first-hand about the value of community-based arts programs. It is how he found his way here to UNC Greensboro, where he is a sophomore composition student in the School of Music.
Triston was nine years old when he saw the Disney movie Fantasia 2000, and he was hooked.  Born in Miami and living in La Ceiba, on the northern coast of Honduras, he played folk music on his guitar and sang in church, but that film was his first introduction to classical music.  When his family moved to Greensboro, Triston was enrolled at Peck Elementary School, where he says a strings accessibility program fulfilled all of his needs.
“I was a very fidgety child and a lonely one at that. With the violin, I had an instrument I could play around with and people to play with. I still remember times when I would attempt to figure out the melodies that the teachers were playing while we were supposed to be paying attention.”
Triston played violin and viola while at Peck, which along with Cone Elementary, hosts the Lillian Rauch Beginning Strings Program, a partnership between UNCG and the Greensboro Symphony Orchestra started with a donation from the late Lillian Rauch, a local arts benefactor.
Rebecca MacLeod, Professor of Music Education at UNCG, directs that program and another community partnership, the Peck Alumni Leadership Program.   She met Triston when he was in the Peck Orchestra, and now he plays in UNCG’s Sinfonia, which she conducts. She says she has always been fascinated by what Triston has to contribute.
“He was so bright and super active! I can remember vividly that he loved music and wanted to play more advanced music than what we were attempting in class. He was also incredibly articulate at that early age. I always enjoyed talking to him about the world, and he would reference current issues that he knew about from the news and make connections between so many different ideas.”
Triston’s love of music continued to grow, and in high school he studied with UNCG Violin Professor Marjorie Bagley. When it came time to think about college he says UNCG seemed like the obvious choice:
“I love how all of the students know and interact with each other, on every level of education. We are all peers, and we are here to help each other.  I am also glad that I can still interact with the Peck Strings program. Everyone in the program works on giving back, which is one of the best parts of it. The other is getting to play alongside students you taught, which is a lot of fun!”
MacLeod agrees that working with the Beginning Strings and Peck Alumni Leadership programs is extremely rewarding:
“I have learned a great deal from the elementary students as they age and become my partners in the Peck Alumni Leadership Program. Watching the students learn how to mentor their younger peers is similar to watching my preservice teachers learn how to teach. The relationships that are developed between everyone who participates in the community is a bit indescribable. Imagine a learning space with people ages 9-45 all collaborating and helping one another learn music! Most recently, one of the sixth graders taught me how to beatbox! That became a rhythmic element that we incorporated into one of our arrangements of ‘Sunflower’ by Post Malone that was performed for the 2019 Symposium on Music Teacher Education hosted at UNCG last month.”
The Beginning Strings program is an elective at Peck and Cone elementary schools, and MacLeod believes that given the number of students eager to join, it is filling a definite need in the community:
“While the primary purpose of the program is to increase access to instrument instruction for underserved students, this program also provides training to preservice music teachers enrolled at UNCG. Music education students are given the opportunity to work with real students within a public school setting. The opportunity to engage young people from diverse backgrounds is essential for future music educators.”
If you would like to support programs like this, contact David Huskins, Development Officer for the College of Visual and Performing Arts, at drhuskin@uncg.edu or 336-256-0166