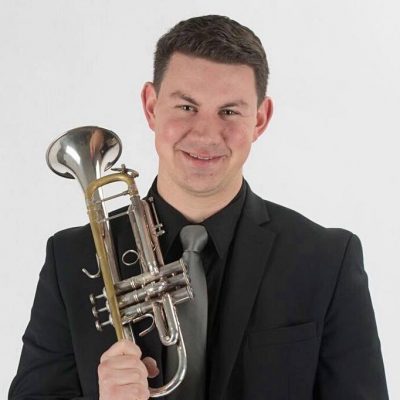 The UNCG School of Music is pleased to announce that Garrett Klein has been appointed to the faculty as Lecturer of Trumpet for the 2019–20 academic year. “[The] UNCG School of Music is truly an institution of the highest caliber, and I am extremely humbled to be joining such a thriving community,” Klein said. “To say I’m looking forward to this opportunity is an understatement. I can’t wait to work with the incredible trumpet students, faculty, and staff at UNCG!”

Garrett Klein has performed across the United States and Asia as a soloist, chamber player, and orchestral musician. Garrett is currently a member of the Dallas Brass, an internationally recognized touring brass ensemble that has mastered a wide range of musical styles. In addition to offering breathtaking performances across the US, the Dallas Brass shows a unique commitment to music education by working with students of all ages while on tour.

Outside of touring with Dallas Brass, Garrett has been on faculty at St. Olaf and Gustavus Adolphus Colleges, where he coached the talented trumpet students and taught music theory. Klein appears regularly as a soloist, guest orchestral musician, and clinician. He has performed with the Rodney Marsalis Philadelphia Big Brass, The Phoenix Symphony, the Tucson Symphony Orchestra, the New World Symphony, the Singapore Symphony Orchestra, the Malaysian Philharmonic Orchestra, and the Musicians of the Minnesota Orchestra.

Coming from a family of educators, Garrett has an instinct for coaching young musicians. With Dallas Brass and as a solo presenter, Garrett has given clinics at high schools and colleges across the United States. His private students have been admitted to several of the finest music programs in the country, won awards, received substantial scholarships, and have been featured as soloists.

Garrett recently completed a Doctorate of Musical Arts degree at Arizona State University, with a concentration in Music Theory Pedagogy. While at ASU, he served as the Graduate Teaching Assistant to the internationally recognized soloist and pedagogue David Hickman. His dissertation project centers around the recordings of sonatas by Brendan Collins, William Rowson*, Christoph Nils Thompson*, and Luis Engelke* (*premiere recording).

Prior to living in Arizona, Garrett spent a year in Singapore. As a student at the prestigious Yong Siew Toh Conservatory of Music, he studied trumpet with William Theis and conducting with Singapore Symphony associate conductor, Jason Lai. Garrett also taught privately through Partners in Brass, the country’s leading music education resource for brass students. As a freelance musician in Singapore, he was a featured soloist on the 2012 Singapore National Day Parade soundtrack, performed with Australian jazz legend James Morrison, along with many local orchestras. Garrett has been fortunate to take part in educational outreach trips in Singapore, as well as to Malaysia and Burma. While in Burma, he had the distinct honor of performing for the Burmese democracy leader, Aung San Suu Kyi, at her famous estate.

Garrett received his Bachelor of Music degree from St. Olaf College in Minnesota, where he studied with Dr. Martin Hodel. It was at St. Olaf where Garrett met his wife, Mara, and together they discovered their passion for travel and the great outdoors.

Garrett Klein is an endorsing artist for Conn-Selmer and proudly performs on Vincent Bach trumpets.