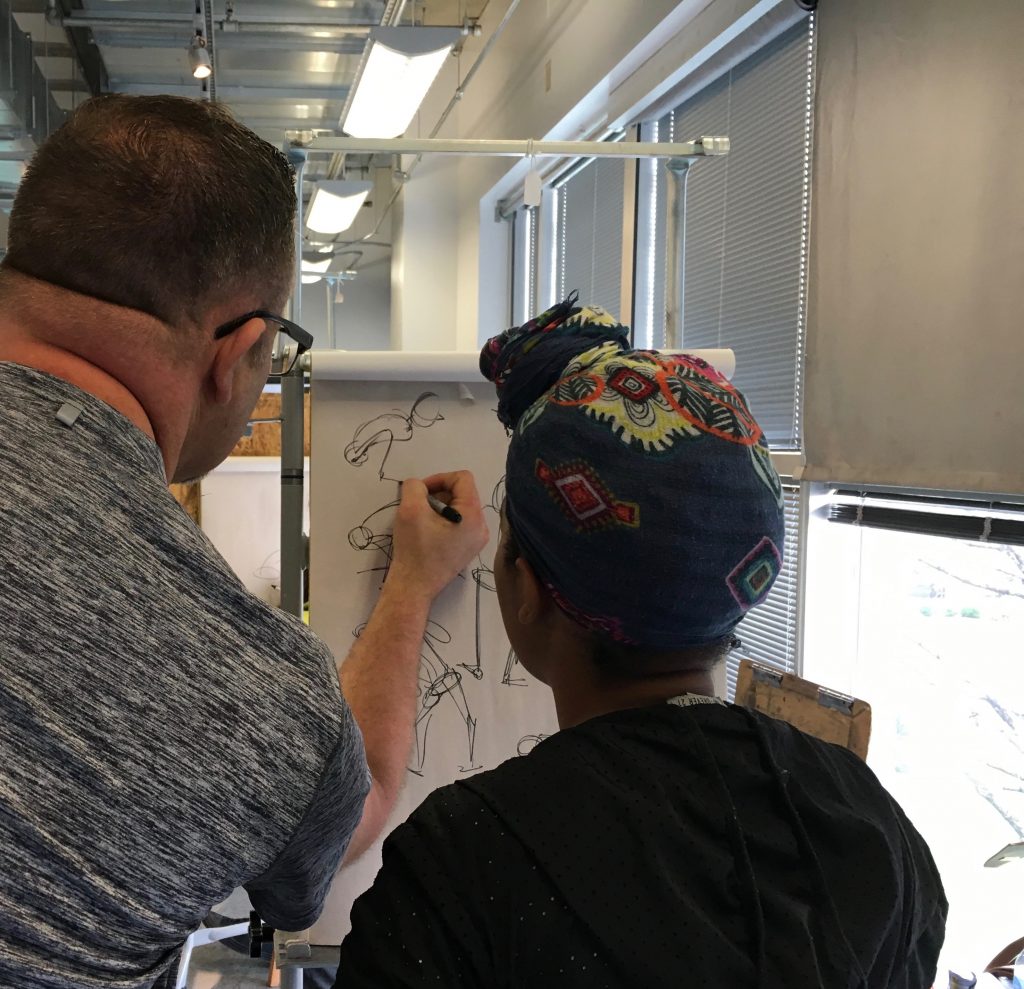 “Just rip that paper off and toss it on the floor if you need to, just keep going.”

That encouragement was from Dan Holland, an Art Director at Pixar Animation Studios to a group of 20 advanced Art students at UNC Greensboro’s College of Visual and Performing Arts on the weekend of April 5-7.

And keep going they did.  For hours.  Creating hundreds of sketches.  On a sunny Sunday afternoon in the Gatewood Studio Arts Building to the sounds of Dave Brubeck’s jazz and the murmured comments of a mentor.  A model in the center of the room constantly changed positions, and with each change, the students’ sharpies flew across 11×17 sheets of paper capturing the gestures.  All of this under Holland’s expert eye as he walked from easel to easel, sometimes stopping to tweak a drawing.

The students are part of the School of Art’s experimental course, ART 391: Character Design Workshop.  Dan Holland is a Pixar veteran.  Initially hired as an animator, he made the permanent move into the art department on the film WALL-E. Most recently he has served as Sets Art Director for Toy Story 4, which will be released on June 21, 2019.

Holland and the students were brought together by Dr. Heather Holian, who taught a class on “The Art of Disney” when she was in graduate school at Indiana University.   She brought that idea to UNCG, where she expanded the course to include Pixar.  Consistent visits from Pixar artists to UNCG for lectures and workshops have also become part of the course and the School of Art’s offerings.  Professor Holian is also currently finishing a book on the artists and collaborative dynamics of Pixar after multiple trips to the studios where she has interviewed artists, worked in the archives and studied the artwork.

She says the relationship between the studio and the university, and visits like the one with Holland, are invaluable to School of Art students.

“Besides being a gifted teacher and talented artist, Dan brings a very high level of practical, industry experience that is absolutely invaluable to those of our students who are interested in entering fields that involve illustration or animation. He’s doing this sort of work every day, so aside from what he’s teaching, he is also a great resource for students who want to ask questions about the animation field, how to get into that field, and what they should be doing as students to prepare for that world. For three days he is not only a dedicated teacher, but also an enthusiastic mentor.”

This is Holland’s second time doing this type of workshop at UNCG, which teaches the basics of character design through a series of lectures, exercises and critique. The exercises involve collage and drawing.   The workshop culminated in an afternoon of gesture drawings where students work on developing clear, readable and communicative poses for characters by studying a live model.

Holland says he asks the students to push past boundaries to get to their most creative self.

“I want students to set aside the anatomy and the realistic drawing that they’ve learned and do some exploration, get beyond the reality of the human form.  And then, I want them to start bringing those principals back in a way that is personal to them and in a way that communicates a story.  Think about the story that is being told through the gesture, rather than focusing on which bone connects with which muscle.”

Ansu King is a Studio Arts and Arts Administration double major from Charlotte.  He says his instructors at UNCG have been great, but it’s nice to get a new perspective.

“I think visiting artists are important because it’s great to absorb everything they have to offer. I learned A LOT from Dan’s event in the short time he was here. To see a different approach or idea can be a breath of fresh air.  Three days went by so fast! I really wish it were a week, or better yet a whole semester.  Dan was awesome and I told him to get ready to see me in the next years to come. “

King graduates this summer and would like to pursue a career in digital art, perhaps at Pixar or another animation studio.  His long-term goal is to start his own studio for young aspiring artists.

“I think a lot of schools do not prepare adolescents for pursuing art as a career. I’d like to give them the tools and skills to make sure they want to become artists when they come to schools like UNCG and they make the most out of their time here.”

Rachel Meade, from High Point, is graduating in May with a BFA in Painting.  She agrees that visiting artists add value to her college experience.

“They are important to my studies because they offer the chance to not only learn, but I get industry feedback.  I left the workshop feeling so inspired!”

Whatever King and his classmates wind up doing, the future for animation at UNCG is looking more and more well drawn.  Dr. Holian says the School of Art is in the process of hiring a Visiting Artist in Residence with a specialty in animation or concept art.

“We will look to this person to help us build a dynamic and exciting program in animation over the next couple of years. “

In the meantime, Dr. Holian will continue teaching her fall semester course, The Art of Disney and Pixar, which is open to all UNCG students and she will continue her practice of inviting Pixar artists to campus for class visits and lectures.  For more information about UNCG’s School of Art visit vpa.uncg.edu. 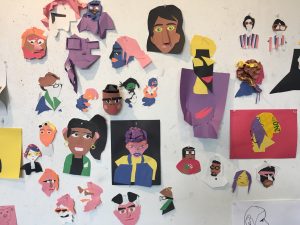 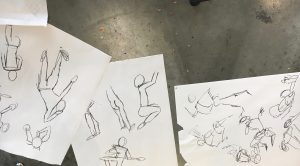