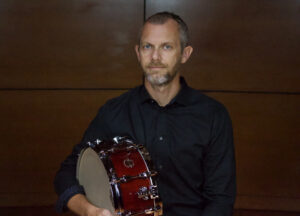 Described as a “true musical talent and professional” Eric Willie has a varied career as a percussion soloist, chamber musician, orchestral player, and teacher.

Having performed on three continents, Eric has presented solo performances throughout the United States, Russia, Brasil, and Colombia. Most recently, Eric performed as soloist with the Tamborimba Ensamble in Cali, Colombia, and conducted Edgard Varese’s “Ionisation” at the III Encontro Percussivo in Recife, Pernambuco Brasil. In the United States, Eric has performed or conducted at ten Percussive Arts Society’s International Conventions (PASIC), presented at the Midwest Clinic, as well as several state days of percussion and music educator conventions.

Active within the Percussive Arts Society (PAS), Eric previously served as Chair of the International Percussion Ensemble Committee, President of the Tennessee Chapter, as a New Literature and Recordings Reviewer for Percussive Notes journal, and now serves as Vice President for the North Carolina Chapter of the Society. His percussion ensembles have been named winners of the 2015 and 2020 PAS International Percussion Ensemble Competition.

In addition to his talents as a classical percussionist, Eric is known for his marching percussion arranging and teaching experience. He has served on staff with the Cavaliers Drum and Bugle Corps, served as a Percussion Consultant with the Phantom Regiment Drum and Bugle Corps (2012-2013), and instructor and/or arranger for the Spirit, Southwind, Carolina Crown, and the Madison Scouts drum and bugle corps. He has also instructed for the University of North Texas “A” Line, Music City Mystique, and as Faculty for the Music for All World Percussion Symposium.

As an author and composer, his books and solo have been published by Innovative Percussion, TapSpace, and Row-Loff. The latter, his coauthored “All-Inclusive Audition Etudes” book, has been adopted for use by the North Carolina and Tennessee Music Educator’s Associations.

Currently, Eric serves as Professor of Percussion Studies at the University of North Carolina at Greensboro, where he directs a comprehensive percussion program. In addition to his teaching opportunities, Eric has served as Chair of the School of Music Faculty, as Chair of the Brass and Percussion Area, as well as a member of the Strategic Planning Committee.