Go beyond the program and explore the music with our panel. The discussion begins at 6:50 pm from the auditorium stage. Free and open to the public.

Through the Looking Glass

Minstrels of the Kells 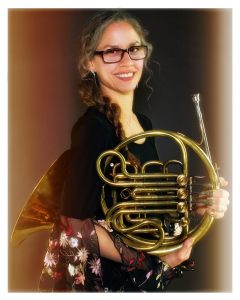 Dr. Abigail Pack, Associate Professor of Horn at UNCG, native of Roanoke, Virginia, received her training from East Carolina University (BMA), University of Iowa (MM), and University of Wisconsin-Madison (DMA) where she was a Bolz Teaching Fellow. Before assuming her current position at UNCG she was Horn Faculty at James Madison University from 2001 to 2008. She has also been on faculty at Knox College in Galesburg, IL; Western State College in Gunnison, CO; and taught in the Gunnison Watershed School District. An avid symphony player, Dr. Pack has held positions with the Barton Symphony Orchestra, Quad Cities Symphony Orchestra, Des Moines Symphony Orchestra, the Wisconsin Chamber Orchestra, and currently performs with the Roanoke Symphony Orchestra, the Wintergreen Summer Music Festival Orchestra, the Southwest Chamber Orchestra, and the Opera Roanoke Orchestra. Other venues have included performances with the Iowa Brass Quintet, Western Slope Brass Band, and Massanutten Brass Band. Recent performance and presentation highlights include the National Flute Association (Washington D.C. with the Montpelier Winds), the International Horn Symposium (University of Cape Town, South Africa), the International Midwest Band and Orchestra Conference (Chicago), and the Kennedy Center of The Performing Arts (Washington).