This program is a recreation of Dr. Dennis AsKew’s (1964–2021) first faculty recital by former students. 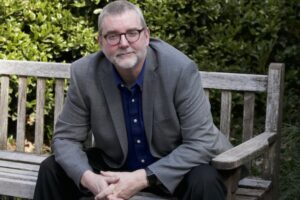 Dr. Dennis W. AsKew (1964–2021) was Director of the School of Music, professor of tuba, euphonium, and music education during his 29 year tenure at UNCG. He served for over seven years in his administrative role, first as the Dept. Head of Music Performance in the School of Music, Theatre, and Dance, and then as Director of the School of Music in the College of Visual and Performing Arts. His service to UNCG was invaluable and his administrative contributions were extensive and included included directing the School of Music’s re-accreditation; chairing the Chancellor’s Installation Committee and serving on the Graduate Studies Committee, Chancellor’s Advisory Committee on Intercollegiate Athletics (ACIA), and UNCG Strategic Schedule Committee; leading a delegation of music faculty in attending the Century Music School Summit on 21st Century Music School Design; establishing relationships with conservatories in China; representing the School of Music at national conferences; overseeing COVID-19 preparations for the School of Music; planning for the School of Music Centennial in 2021-22; and serving on boards for the Greensboro Symphony Orchestra and Eastern Music Festival. Dr. AsKew was a member of the National Association of Schools of Music (NASM) Commission on Accreditation. A former member of the Brass Staff for Spirit of Atlanta Drum and Bugle Corps, he also served as Consultant to the Board of Directors for Carolina Gold Drum & Bugle Corps. Dr. AsKew received degrees from the University of Michigan, Penn State University and the University of Georgia. Dr. Askew attended the Eastman School of Music’s Leadership Institute in 2017 and received the Huron Leadership Certificate from the American Council on Education in 2016. He served as President for the International Tuba Euphonium Association, Assistant Dean for the School of Music (1998-2000), and was host of the 2002 International Tuba/Euphonium Conference. In 2003, he was elected an Associate Regent for Pi Kappa Lambda, the music honor society. Dr. AsKew was active as a performer, having given solo performances throughout North America, Europe, and Australia, as well as numerous concerts throughout the United States and China as a member of the Market Street and Palladium Brass Quintets.