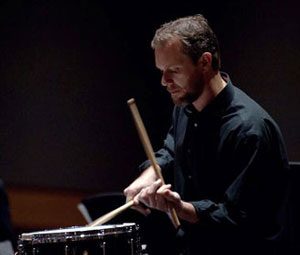 Dr. Eric Willie has joined the School of Music as Director of Percussion Studies & Assistant Professor of Percussion. Described as a “true musical talent and professional” (Ivan Trevino, Composer), Dr. Willie has a varied career as a solo performer,

Active within the Percussive Arts Society (PAS), Eric currently serves as Chair of the International Percussion Ensemble Committee. In addition, Eric has served as President and Vice-President for the Tennessee Chapter of PAS, and as a New Literature and Recordings Reviewer for Percussive Notes journal.

In addition to his talents as a classical percussionist, Dr. Willie is known for his marching percussion arranging and teaching experience. He has served as a Percussion Consultant with the Phantom Regiment Drum and Bugle Corps, and instructor and/or arranger for the Spirit, Southwind, Carolina Crown, and the Madison Scouts drum and bugle corps. The University of North Texas, University of Kentucky, and the Murray State University Drum Lines have performed his marching percussion arrangements. He has also instructed for the University of North Texas “A” Line, Music City Mystique, and as Faculty for the Music for All World Percussion Symposium.

As a clinician, Dr. Willie has appeared at the Midwest Band and Orchestra Clinic in Chicago, IL, several “Days of Percussion,” as well as several state music educators conventions throughout the midwest and southeastern United States. His educational articles have appeared in The Instrumentalist and Percussive Notes, and he has contributed educational resources to Innovative Percussion, Inc., Sabian Cymbals, Evans Drumheads, and Black Swamp Percussion. His music has been published by Innovative Percussion and TapSpace publications.

Eric holds the Doctor of Musical Arts degree from the University of North Texas, a Master of Music from the University of Kentucky, and a Bachelor of Science in Music Education from Austin Peay State University. Eric and his wife, Rebecca (violinist with the Nashville Symphony), will be moving to Greensboro, NC prior to the start of the fall semester with their son and daughter.