Tickets
Face Coverings
Face coverings that cover the nose and mouth are strongly encouraged, but not required, while inside the performance hall. 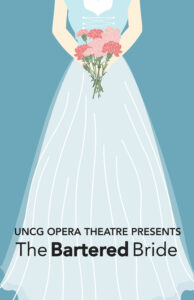 Marie and Jenik are in love but cannot marry because Marie’s father, Micha, has promised her to another man, Vasek. Jenik deepens her despair by seeming to sign her away for money to the marriage broker, Kecal. In reality, Jenik bargained that she marry no one but Micha’s true son. At the crucial moment, he steps forward to reveal he is Micha’s son by a former marriage and can thus marry Marie without breaking her parent’s pledge.

About the Opera Theatre

The UNCG Opera Theatre, under the direction of David Holley, annually produces at least four operas. In the fall, our annual “Tour to the Schools” reaches over 10,000 area school children and a chamber opera is presented in November (Amahl and the Night Visitors in even years). In the spring, the School of Music and the School of Theatre join forces on a large-scale opera, and the UNCG Opera Theatre collaborates with the Greensboro Opera to present GO’s signature outreach program, “Opera at the Carolina,” in which every fifth grader in Guilford County (6,000+) attends a live opera at the downtown Carolina Theatre.

Since 1993, UNCG’s productions have regularly earned awards in the National Opera Association’s Annual Opera Production Competition, including seven first place awards for: Susannah, Little Women, Orpheus in the Underworld, The Consul, Dialogues of the Carmelites, Amahl and the Night Visitors, and Don Giovanni. Second place was awarded for our productions of Gianni Schicchi, Albert Herring, La vida breve, L’Enfant et les Sortilèges, and Philip Glass’s Galileo Galilei, which Mr. Glass attended, and he worked with our cast.

Alumni of the UNCG College of Visual and Performing Arts have been on the rosters of some of the world’s most prestigious stages, including the Metropolitan Opera (Joel Sorensen, Sidney Outlay, Ian Greenlaw), The New York City Opera (Jason Karn), The Chicago Lyric Opera (Melinda Whittington), The San Francisco Opera (Joel Sorensen), and The Houston Grand Opera (Tyler Smith), and as well as major summer festivals, such as Wolf Trap (Melinda Whittington) and Central City Opera (Andrew Owens).

One of the primary missions of the UNCG Opera Theatre is outreach to the community, and in particular, educating children about opera. Activities include on-campus matinee performances and an annual tour to elementary schools; the latter has trained many singers who have gone on to year-round Young Artist Programs in which they perform children’s programs for regional companies and summer YAP’s. The UNCG Opera Theatre annually introduces over 18,000 school children to the wonderful world of opera.