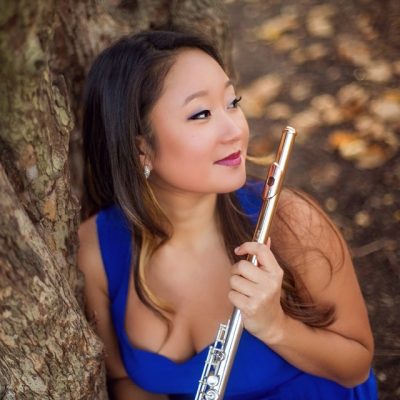 Flutist Sarah Shin is a vibrant performer, educator, and collaborator. Some of the highlights of this year include recording an album at Wiener Konzerthaus and performing with the Karlovy Vary Symphony Orchestra in Prague, Czech Republic at Smetana Hall. She has also recently become an IMK Concert Series Artist (based in Vienna, Austria).

A native of Iowa, Dr. Shin made her concerto debut at age 16, playing Jacques Ibert’s Concerto for Flute and Orchestra with the Central Iowa Symphony Orchestra, where she was the winner of the Young Artist Competition. After, she moved to Boston, MA and attended Walnut Hill School of the Arts where she performed in the Boston Youth Symphony Orchestra, under conductor Frederico Cortese. She was a finalist of the Boston Symphony Concerto Competition, National Flute Association High School Soloist Competition, and won Second Place of the New England String Ensemble Competition and First Prize of the Des Moines Symphony Alliance Competition.

As an educator, Dr. Shin is on faculty at the Rutgers University Mason Gross School of the Arts Extension Division as flute instructor and chamber music coach. She has a private studio and gives private flute lessons and masterclasses to students of all levels. She has given masterclasses and workshops at universities and conventions all over the US, such as Princeton University, University of Washington, Ferrum College, William Paterson University, Utah Valley University, and The Mid-Atlantic Flute Convention, to name a few. During the 2016-2017 school year, she was on the Flute Faculty at the Center for Musical Excellence in New Vernon, NJ. She also served as the Director of Admissions. Recently, she has been appointed as Co-President of the New Jersey Flute Society.

Along with a substantial teaching and performing schedule, Dr. Shin is an active chamber musician and orchestral musician. This year, she has played with Virginia Symphony Orchestra and Virginia Opera. She is the principal flute of Houston Serenade Project, a chamber series dedicated to bringing eclectic chamber music to communities. She is also a founding member of the Emissary Quartet (www.emissaryquartet.com), founded in 2009. In November 2016, the Emissary Quartet premiered a work by Annika Socolofsky, which was made possible by a grant from the Fromm Music Foundation at Harvard University. Emissary Quartet was quarterfinalists in the 2016 Fischoff Chamber Music Competition, and was the only flute quartet to have competed within the last seven years. They also performed at the 2018 BMI Classical Music Awards Ceremony and the National Flute Association’s 44th Convention in San Diego, California. The Emissary Quartet is a recipient of multiple grants from the Friends of Flutes Foundation, Inc. and NewMusic USA.

Dr. Shin received her Bachelor of Fine Arts in Flute Performance from Carnegie Mellon University School of Music, her Master of Music in Flute Performance from Indiana University Jacobs School of Music, as a Barbara and David Jacobs Scholar. She received her Doctor of Musical Arts at Rutgers University Mason Gross School of the Arts. Her primary teachers include Jeanne Baxtresser, Bart Feller, Thomas Robertello, Judy Grant, and additional studies with Alberto Almarza and Marianne Gedigian.