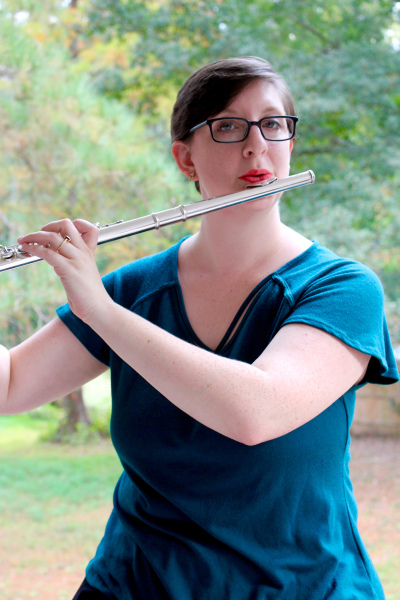 Sarah Busman is a Master of Music graduate of the prestigious Peabody Conservatory of Music in Baltimore, Maryland where she received the Ruth Blaustein Rosenberg Orchestral Scholarship.  A native of Tennessee, Sarah got her Bachelor’s degree from Middle Tennessee State University where she was named the McLean School of Music’s Wright Music Scholar in 2006.

As a performer, Sarah has performed with numerous orchestras. In the US, she has substituted with the Baltimore Symphony, the Raleigh Civic Symphony, and the Moscow Ballet’s Maryland Nutcracker pit orchestra.  Sarah has also played with several orchestras and chamber groups overseas, including in China, Hong Kong, Korea, and in February 2012 as the guest principal flutist of the Amman Symphony in Jordan. While at Peabody, she was the principal flutist of the Peabody Symphony Orchestra, the top performing ensemble at the Conservatory.

Sarah loves to teach and has taught private lessons to elementary, middle, and high school students for almost ten years. She served as the Applied Flute Professor at the Community College of Baltimore County, Essex. While at CCBC, she also taught an Instrumental Repertoire class to all music majors. In 2015, Sarah also taught as the interim flute professor at the University of North Carolina at Chapel Hill.  As a teacher, Sarah believes in using classical training in tone and technical development to create an enriched musical personality that allows each student to bring his or her own interpretation to the music. She also introduces theoretical and historical information in order to create further understanding and give each student the tools to be truly well-rounded. Sarah uses these tools in her lessons and masterclasses. She has presented masterclasses at the Raleigh Area Flute Association’s 2010 Flute Fair and a guest artist at Middle Tennessee State University and Methodist University. She has also judged the High School Solo competition and the recorded round of the Masterclass Performer’s Competition for the Mid South Flute Festival, as well as for RAFA’s annual Review and Contest. Beyond lessons and classes, Sarah has presented Engaging the Young Listener, a lecture targeting young students in the concert hall, at the Mid South Flute Festival. This summer, Sarah will premiere two of her new arrangements at the National Flute Association Annual Convention.

Sarah currently lives in Fayetteville, North Carolina with her husband Josh, her son Arthur, and her hound dog Foster. Sarah serves as the principal flutist for the Fayetteville Symphony Orchestra and the Carolina Philharmonic, and she is the flute professor at the University of North Carolina at Pembroke.