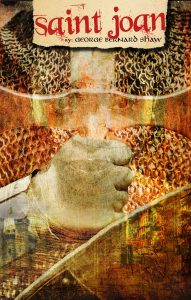 Saint Joan is Bernard Shaw’s greatest play. At its center is the most remarkable teenage girl in history. But who is she? The divinely-inspired savior of France? A dangerously clever charlatan? Or a pathetically deluded country girl? It all depends on your point of view. Whatever she is, eventually Joan is bound to become an embarrassment to the male-dominated world she has turned upside-down. And then what? —Shaw Festival

“Joan’s religious fanaticism, reaching us through the perspective of 500 years and then filtered through Shaw’s imagination, becomes the protest of a plain-spoken individual conscience.” —The Guardian

“She had appeared to violate the rules. She was warned. She was given an explanation. Nevertheless, she persisted. And that persistence, deadlier than the kind that earned Massachusetts Senator Elizabeth Warren her infamous rebuke, led directly to Joan’s death at the stake. —The Buffalo News