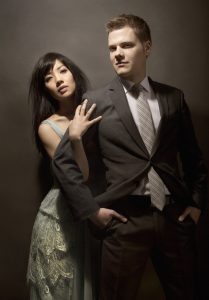 Known for their adrenalized performances, original compositions, and notorious music videos, GREG ANDERSON and ELIZABETH JOY ROE are revolutionizing the piano duo experience for the 21st century. Described as “the most dynamic duo of this generation” (San Francisco Classical Voice), “rock stars of the classical music world” (Miami Herald), and “the very model of complete 21st-century musicians” (The Washington Post), the Anderson & Roe Piano Duo aims to make classical music a relevant and powerful force around the world.

During the 2017-18 season, they perform across the North American continent in numerous recital appearances (including their Kennedy Center debut), then make their way to New Zealand for a 10-city tour. Orchestral engagements include performances of Anderson & Roe’s Carmen Fantasy for Two Pianos and Orchestra with the Hartford Symphony Orchestra, Poulenc’s Concerto for Two Pianos with the Hartford Symphony Orchestra and the Rochester Philharmonic Orchestra, Mozart’s Concerto for Two Pianos with the Missoula Symphony Orchestra and the Vancouver Symphony, Bach’s Concerto for Two Pianos with the Palo Alto Chamber Orchestra, and a Halloween multimedia recital program for the San Francisco Symphony. Other season highlights include hosting the 17-day medici.tv webcast of the 2017 Van Cliburn International Piano Competition, the release of their latest album, Mother Muse, and the introduction of a new music competition which will award the winning composer an Anderson & Roe-produced music video.

Anderson & Roe met as freshmen at The Juilliard School and formed their dynamic musical partnership shortly thereafter. They have since toured extensively, with notable recitals in the United Kingdom, Switzerland, Germany, Austria, Italy, Estonia, Israel, Singapore, China, Hong Kong, Taiwan, South Korea, Japan, and most major US cities, as well as in nearly every New York City venue imaginable, from Carnegie Hall to children’s hospitals. They have appeared at the Gilmore and Gina Bachauer International Piano Festivals; the Mostly Mozart and Styriarte Festivals; the Cliburn Concert Series; and the Grand Teton, Santa Fe, Chautauqua, Orford, Ventura, Skaneateles, Carmel Bach, and Minnesota Beethoven summer music festivals, to name a few. Their past orchestral engagements include performances with the orchestras of San Francisco, Liverpool, Calgary, Hartford, Boulder, Chautauqua, Waco, and Winnipeg, among others, and with members of the Metropolitan Opera Orchestra. In 2015, Anderson & Roe premiered Brahms’ Double Concerto in their arrangement for two pianos and orchestra with the resident orchestra of Performance Santa Fe.

The duo’s innovations have captivated such media outlets as MTV’s Total Request Live, NPR’s All Things Considered and From the Top, APM’s Performance Today, PBS’ Texas Music Cafe, and BBC’s In Tune, as well as Gramophone, Clavier Companion, Listen, and Pianist magazines, and the Huffington Post. They are profiled in Nick Romeo’s book, Driven. Their singular vision for the advancement of classical music has resulted in invitations to present at numerous international leader symposiums, including EG (Entertainment Gathering), the Imagine Solutions Conference, Chicago Ideas Week, and Mexico’s Ciudad de las Ideas. Their scores are published by Alfred Music on the “Anderson & Roe Duos & Duets Series” and by Awkward Fermata Press. Their albums on the Steinway Label (When Words Fade, An Amadeus Affair, and The Art of Bach) have all received critical acclaim and have spent dozens of weeks at the top of the Billboard Classical Charts, while their Emmy-nominated, self-produced music videos have been viewed by millions on YouTube and at international film festivals.

Anderson and Roe left an indelible impression at The Juilliard School, where they both earned their bachelor’s and master’s degrees. They performed the world premiere of their own composition, Star Wars Fantasy: Four Impressions for Two Pianos, in Juilliard’s “Cinema Serenades” concert at Alice Tully Hall. They directed the groundbreaking project “Life between the Keys,” which involved the entire Juilliard Piano Class of 2004. A live performance by the duo is included on the Sounds of Juilliard album celebrating the school’s centennial year.

Anderson & Roe believe strongly in the communicative potential of music, bringing joy to people around the world. As the Northwest Reverb observed, “[Anderson & Roe] swept the audience into a cheering mass of humanity, making a strong case that playing piano is the most fun thing that two people could ever do together.”