CVPA >> Events >> drama, musical, performance, Play, school of theatre, Shakespeare >> A Musical Adaptation of William Shakespeare’s AS YOU LIKE IT

A Musical Adaptation of William Shakespeare’s AS YOU LIKE IT 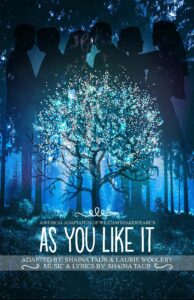 Face coverings must be worn by everyone in the facility per UNCG policy.

A new musical adaptation of the Shakespeare classic!

“Named one of The New York Times’ best shows of 2017, As You Like It is an immersive dream-like tale of faithful friends, feuding families and lovers in disguise. Forced from their homes, Orlando, Duke Senior, his daughter Rosalind and niece Celia, escape to the Forest of Arden, a fantastical place of transformation, where all are welcomed and embraced. Lost amidst the trees, the refugees find community and acceptance under the stars. Featuring an original folk-pop score by Shaina Taub, with a flexible-sized cast and running 90 minutes long, As You Like It is appropriate for all audiences and groups. Fall under love’s spell with this magical story!”
—Concord Theatricals

“Shaina Taub and Laurie Woolery’s adaptation of As You Like It, which played at the Seattle Rep this past week as part of the theater’s Public Works program, gives the Bard a modern spin. There are gender swapped roles (male characters played by women, and vice versa). There’s a range of sexual preferences. There’s a pesky vegetarian, lecturing the local villagers on why it’s not right to eat those pretty deer. And oh yes, it’s also a musical (lyric and music by Taub).”
—The Northwest Music Scene

“There may be no such thing as too much Shaina Taub.” —The New York Times

“Go and see this one.” The New York Times Review —NY Times Critic’s Pick and one of their best Shows of 2017!

As You Like It is presented by special arrangement with Concord Theatricals.