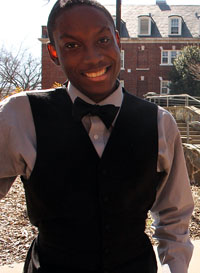 Trimain Green (Music Education, ’16) has recently become the General Music teacher at Stovall-Shaw Elementary School in Stovall, North Carolina (Granville County). He had recently completed his student teaching with Allison Phillips at Northwest Middle School in Greensboro. While at UNCG, Trey was a member of the University Band for two years and a member of the Symphonic Band for two years, and was a member of the Music Student Ambassadors, and Mu Phi Epsilon. Congratulations to Trey on his new position!

Clarinet studio member and music education Jennifer Dewey is currently serving as the President of the UNCG chapter of the music fraternity, Mu Phi Epsilon. The UNCG chapter is an active one, with ongoing service projects, fundraisers, and social events within and outside the School of Music. Jennifer is also a member of NCMEA, NAFME, and ASTA, and has recently developed a passionate interest in string teaching, in addition to her interest to become a band director. She is an active performer at UNCG, a member of the Symphonic Band, is performing in several recitals this semester, serves regularly as a volunteer, and holds a part-time job. She is keeping very busy, and we thank her for serving our UNCG community in all of those ways!

Thanks to Mike Waddell, clarinet professor from UNC – Wilmington and the Vandoren company, for his February 3 visit and excellent class on jazz clarinet.

The Brazilian clarinetist Darkson Magrinelli is pursuing a DMA degree at UNCG and is developing a research project and dissertation about the Early Choro Ensemble and its influence on the creation of the Choro genre.

Before joining the UNCG community, Magrinelli lived in Los Angeles for 6 years and studied at Azusa Pacific University where he earned his Master’s Degree and Artist Certificate with his Michele Zukovsky.

At Azusa Pacific University, Magrinelli worked as an International Recruiter and Counselor for the International Enrollment Services. Nowadays, he is a Representative for APU’s College of Music and the Arts in Brazil and is developing a project between APU and Instituto Baccarelli which is headquartered in Heliopolis – once considered the largest slum in São Paulo. Instituto Baccarelli is an association which offers community members  and other young people from Brazil outstanding musical educational opportunities. This project aims to bring together these two institutions to able to offer more opportunities for these kids and to connect students from Brazil and California.

Magrinelli played professionally in orchestras in Brazil for about 10 years before he moved to California. He was a member of the Lake Avenue Chamber Orchestra in Pasadena from 2010 to 2014. In 2011, he left his mark in the American music scene, when he received praise from visiting conductor and composer Frank Ticheli who stated that “Darkson performed one of the best performances that I have ever heard of my clarinet solo in Blue Shades.” Magrinelli won competitions and has played concertos as a soloist in Brazil and the United States. As a performer, Magrinelli has played in North/South America, and Europe as well.

Congratulations to Chris DiMassimo (BM ed, ’11), who was recently named the 2016-17 Teacher of the Year at his school! He is in his sixth year of teaching, currently serving as Director of Bands at Gravelly Hill Middle School in Efland, NC.  During the 2015-2016 school year Chris gave presentations about student teaching with two of his mentor-colleagues at two conferences, the North Carolina Music Educators Association (NCMEA) Conference and The Midwest Clinic International Band and Orchestra Conference in Chicago, IL.  Chris maintains an active performing schedule with the Triangle Wind Ensemble in the Raleigh/Cary area.  Last season he had the honor to perform the opening clarinet solo for Gershwin’s Rhapsody in Blue with the ensemble, and he will be performing the clarinet solos with TWE for John Mackey’s Wine Dark Sea in November.