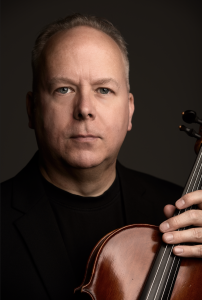 A strong proponent of new music, Rawls has premiered dozens of new works by prominent composers.  Most notable, he has toured extensively as a member of Steve Reich and Musicians.  As the violist in this ensemble, he performed the numerous premieres of Daniel Variations, The Cave and Three Tales by Steve Reich and Beryl Korot, videographer. And under the auspices of presenting organizations such as the Wiener Festwochen, Festival d’Automne a Paris, Holland Festival, Berlin Festival, Spoleto Festival USA and the Lincoln Center Festival, he has performed in major music centers around the world including London, Vienna, Rome, Milan, Tokyo, Prague, Amsterdam, Brussels, Los Angeles, Chicago and New York.

Dr. Rawls currently serves as Professor of Viola and Chamber Music at The University of North Carolina at Greensboro. He holds a BM degree from Indiana University and a MM and DMA from State University of New York at Stony Brook. His major mentors include Abraham Skernick, Georges Janzer, John Graham and Julius Levine.