INTERMEDIATE: Air by Beethoven (Euphonium BC)

INTERMEDIATE: Air by Mozart (Euphonium BC)

ADVANCED: March of the Two Misers (Euphonium BC)

ADVANCED: No. 8 from Concert Duets (Euphonium BC)

NO. 8 from CONCERT DUETS (EUPHONIUM BC/PDF)

NO. 8 from CONCERT DUETS (EUPHONIUM TC/PDF)

Follow the UNCG Tuba and Euphonium Studio on social media 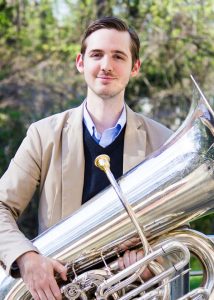 Justin Worley, originally from Atlanta, GA, has just recently completed the DMA degree in tuba performance from the University of North Carolina at Greensboro. At UNCG he was the assistant for the tuba studio and he currently teaches a course in electronic music. Justin has earned a BM from Columbus (GA) State University and a MM from Boston University. He is a member of the newly formed North Carolina Brass Band and can be heard on their debut CD First in Flight.