THE IMPORTANCE OF BREATHING (PDF)
READ MORE AT MICHAELBURNSBASSOON.COM

SOME THOUGHTS ON INTONATION (PDF)
READ MORE AT MICHAELBURNSBASSOON.COM

SOME THOUGHTS ON VIBRATO (PDF)
READ MORE AT MICHAELBURNSBASSOON.COM 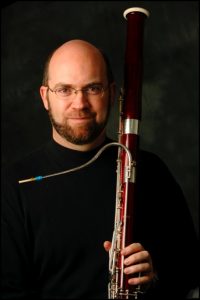 New Zealander Michael Burns has an active career as a teacher and performer. He is Professor of Bassoon at the University of North Carolina at Greensboro, and is a Yamaha Performing Artist. He has recorded for the Centaur, CAP, Telarc, EMI, Klavier, and Mark labels and his solo CD Primavera: Music for Bassoon and Piano by Bassoonists was released in 2009 on the Mark Masters label to critical acclaim. He currently performs as a soloist, in chamber groups, and orchestrally with numerous recent performances at International Double Reed Society conventions, recitals and masterclasses throughout North America, Germany, China and the South Pacific. He serves as principal bassoon with the Asheville Symphony, the North Carolina Opera Company and as bassoonist in the EastWind Ensemble, the Blue Mountain Ensemble, and Forecast Music. He also performs regularly with the North Carolina, and Greensboro Symphonies and as a guest with the Ciompi Quartet and Mallarme Chamber Players. His students have earned positions on the faculties of some of the leading universities in the U.S. In summers, Burns has been associated with the InterHarmony International Music Festival in Tuscany, Italy, the Eastern Music Festival, the Music For All/Bands of America Summer Symposiums, New England Music Camp, and the Affetti Music Festival in Alaska. For more information please visit www.michaelburnsbassoon.com.