The 13th annual High School Keyboard Day (HSKD) gives students an opportunity to grow as musicians, to learn from faculty and fellow participants, and to explore the many opportunities as a student studying a keyboard instrument in college.

HSKD is for students who might be considering a music major in college. This day is an opportunity for students to meet faculty and interact with other keyboard students in a collaborative, engaging day on UNCG’s dynamic campus.

Registration is $20 and can be paid online. This includes lunch and refreshments throughout the day. 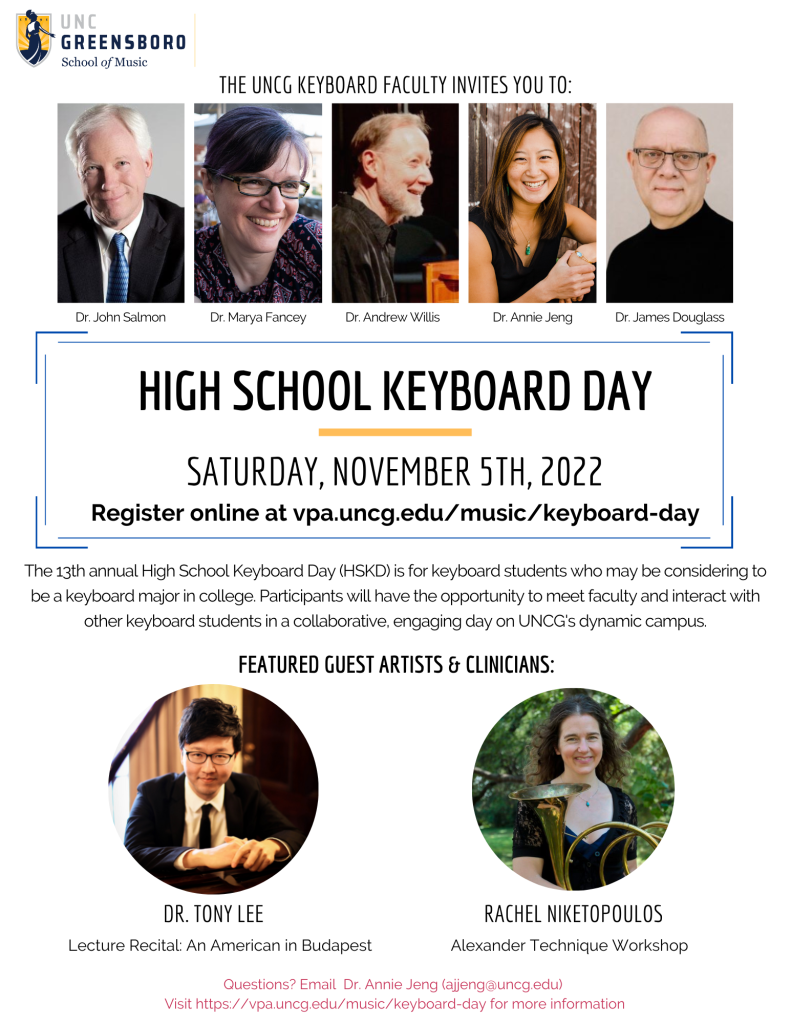 All events will be in-person on UNCG’s Campus.

About Our Guest Presenters and Clinicians: 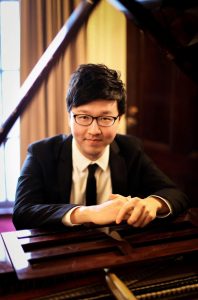 Korean-American pianist Anthony C. Lee was awarded the grand prize at the 2018 Chicago International Music Competition, which launched his career with upcoming performances and a recording contract with A Life of Music Records. Lee has performed across the US and Europe including in Italy, Greece, Hungary, Prague, and Serbia.

Anthony was recently awarded a Fulbright grant for the Liszt Ferenc Academy of Music in Budapest in 2021 to conduct research on the history of the Academy and its rich lineage of Hungarian musicians. During the residency, he engaged in masterclasses and interviews with professors of the Academy alongside his performance activities. In the upcoming season (2022-23), Lee will give a series of lecture recitals across many US institutions including one at Indiana University for the American Liszt Society Festival. In his talk titled, An American in Budapest, Anthony will share his research and experiences of the city and the institution’s cultural vibrancy alongside a unique musical program of Hungarian composers.

Anthony founded in January of 2017 the Cary Classical Concerts and organized a series of themed concerts to offer high-caliber classical music to a broader audience. He also performed solo and chamber music with guest artists, often speaking to the audience that ranged in the hundreds. On radio, he was featured in My Life in Music on WCPE, the classical radio station of North Carolina. 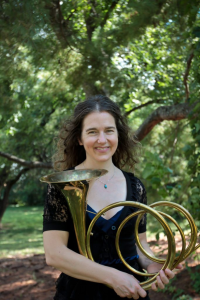 Growing up in a house full of art, music, books, and bicycles in Davenport Iowa, Rachel Niketopoulos (Lecturer) began playing the horn at age 11. She earned horn performance degrees at the Universities of Iowa and Missouri (Kansas City). During college summers, she attended the Music Academy of the West, the Sarasota Music Festival, and the Aspen Music Festival, where she studied with orchestral horn players from Europe, The Met, the Chicago Symphony, and other major American orchestras. She also toured Europe and Israel with the New World Symphony (where she met her future husband) and the North Carolina School of the Arts Orchestra. After seven seasons with the Virginia Symphony and Opera, she joined her husband Christopher Caudill in the horn section of the North Carolina Symphony in 2005 as fourth horn. She is a member of the NC Symphony Wind Quintet, and has been a soloist with the Orchestra in performances of Schumann’s Konzertstuck for four horns, and the Vivaldi Concerto for 2 Hunting Horns RV 539 on the Baroque horn. After developing a passion for early music, she attended numerous summer natural horn workshops at Indiana University, led by IU professor of horn Richard Seraphinoff. Rachel has played her historical horns in several early instrument orchestras including Atlanta Baroque, Apollo’s Fire (Cleveland), NC Baroque, and Bach Akademie Charlotte. She performs on Seraphinoff copies of Baroque and Classical horns originally made by Haleri of Paris, Kerner of Vienna, and Haas of Germany.

In addition to her musical pursuits, Rachel graduated as a certified instructor of the Alexander Technique in 2003 from the Alexander Alliance in Philadelphia. She leads a weekly class at UNC-Greensboro for the music, dance, and theatre departments, as well as her busy schedule of private lessons. Rachel has taught workshops for musicians all over North Carolina and Virginia, including the UNC School of the Arts in Winston-Salem, Southeast Horn Workshops at Appalachian State University, Virginia Commonwealth University, and UNC-Greensboro. She completed the Mindfulness-based Stress Reduction course, offered through Duke University Hospitals. Until Covid, she spent 9 years volunteering with the JobStart program in Raleigh, where she taught yoga and mindfulness to 10 inmates from the Raleigh Correctional Center for Women every Friday. She is currently training to become an Oxygen Advantage breathwork instructor.