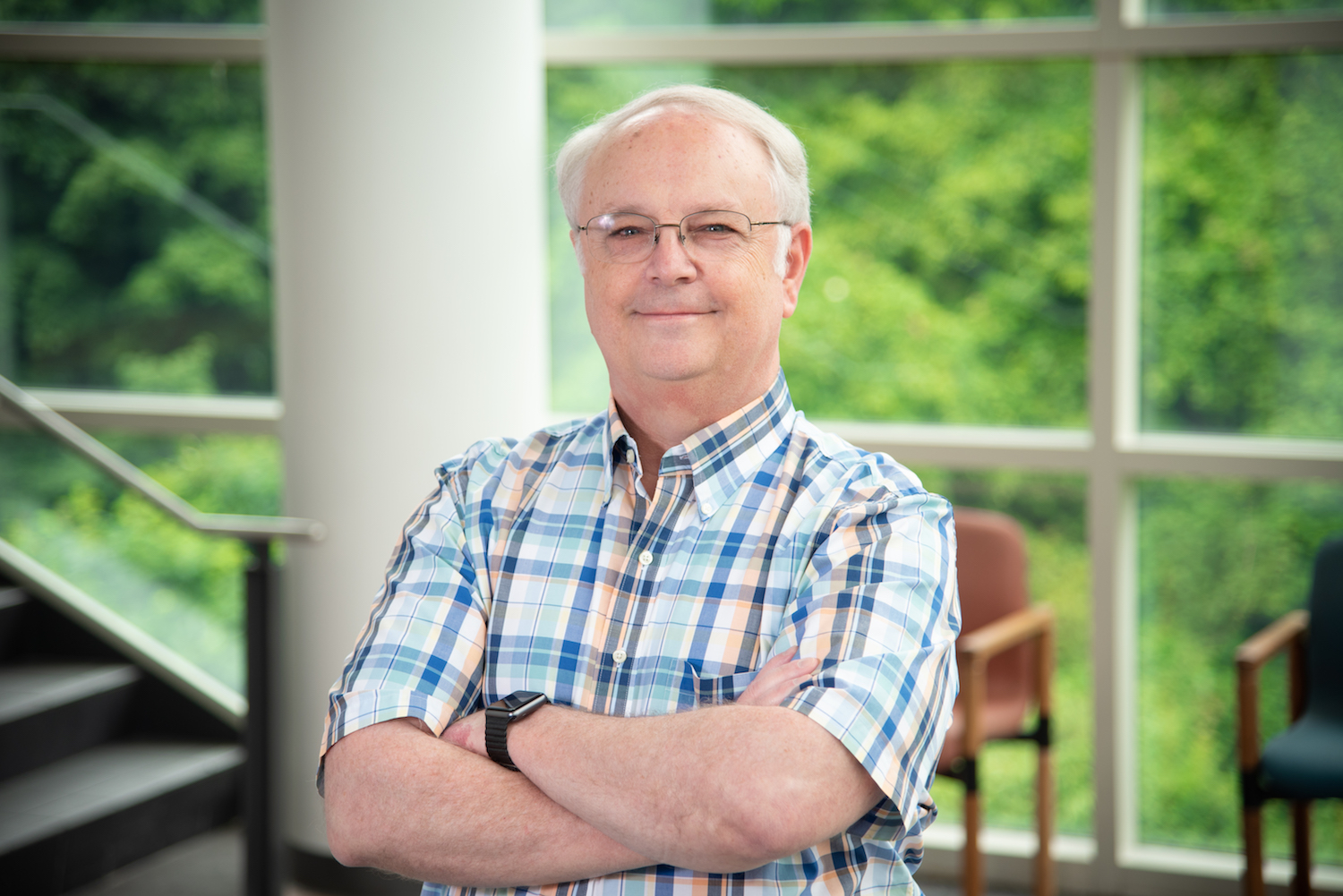 , Director of Bands and Founder & Director of the UNCG Summer Music Camp, will retire in December 2018 after more than 36 years as a member of the UNCG faculty and over 44 years of teaching in higher education.

We invite friends and former students join us on November 17 and 18, 2018 as we celebrate Dr. Locke and his accomplishments. More details will be posted soon regarding Dr. Locke’s Retirement Dinner and the Alumni Band.

All UNCG wind and percussion alumni are invited to participate in an Alumni Band conducted by Dr. Locke. Rehearsal will take place on Saturday, November 17 and the group will perform a short prelude to the Wind Ensemble Retirement Concert on Sunday, November 18. 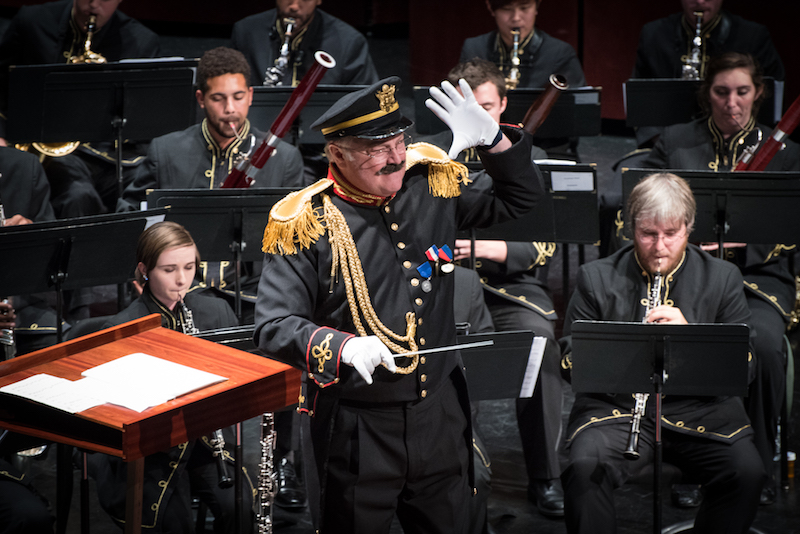 Throughout his storied career, Dr. Locke has had an immeasurable impact on thousands of young musicians through his work with the UNCG Summer Music Camp, university teaching, and leadership in numerous professional organizations.

In recognition of his lifelong commitment to UNCG and music education in North Carolina, the School of Music has established the John R. Locke Scholarship Fund. Please consider making a donation to both honor his tremendous legacy and to help provide future students with a first-rate education at UNCG.

We need your help to achieve our goal of raising the minimum of $25,000 which fully endows the scholarship fund. Your contribution may be made as a single donation or spread out over time in scheduled monthly installments. Any amount is extremely valuable, but we are asking you to give generously!

How to Make a Gift

Give Online or by mail

Contributions may be made online by clicking the link below. Be sure to select “John R. Locke Scholarship Fund” from the list of designations. Mail personal checks to: School of Music, Attn: Dennis AsKew, Director, UNC Greensboro, PO Box 26170, Greensboro, NC  27402-6170

Does your employer match your gift to UNCG? You can increase your gift by making use of your company’s gift matching program. We offer a convenient search tool on our Giving website to help you find out! 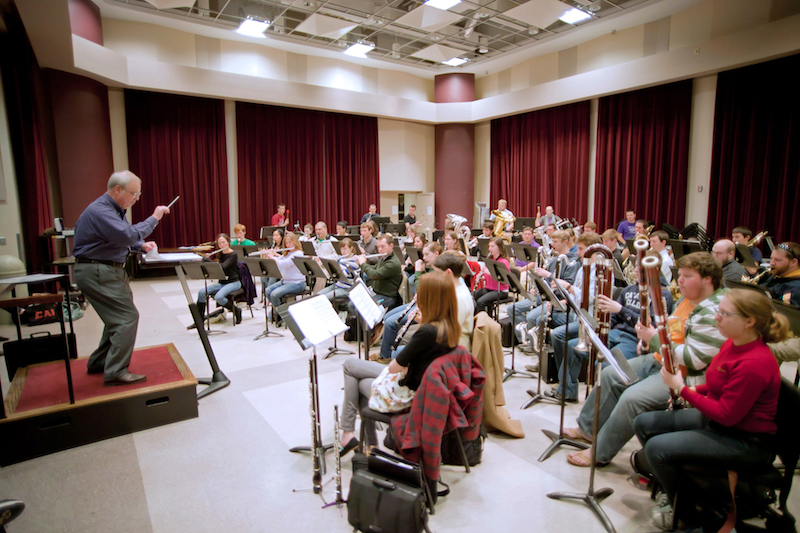 All UNCG wind and percussion alumni are invited to participate in an Alumni Band conducted by Dr. Locke. Rehearsal will take place on Saturday, November 17 and the group will perform a short prelude to the Wind Ensemble Retirement Concert on Sunday, November 18.

Registration for the Alumni Band has now closed.

Dinner will be served buffet-style. Price per person is $25.00 and includes both the dinner and cocktail hour.

Complimentary parking will be available in the Walker Avenue Parking Deck.

Registration for the Retirement Dinner has now closed.

Since 1982, Dr. John R. Locke has served on the UNCG School of Music faculty as Director of Bands, Director of Summer Music Camps, conductor of the Wind Ensemble, and conducting teacher. He holds the Bachelor and Master of Music degrees from West Virginia University and the Doctor of Education degree from the University of Illinois. Prior to his arrival in North Carolina, Dr. Locke held teaching positions in music at West Virginia University, Southeast Missouri State University, and the University of Illinois. He has conducted band performances throughout the world including National Conventions of the MENC, CBDNA, ABA, the Kennedy Center in Washington, D.C., the Strathmore Center in Washington, DC, Lincoln Center in New York City, Dvořák Hall in Prague, Innsbruck, Bologna, and Rome, Italy. Twice, the UNCG Wind Ensemble earned critical acclaim from The Washington Post newspaper following concert performances in the nation’s capital. Under Locke’s leadership, the UNCG Wind Ensemble has released 21 commercially available compact discs including fireworks! which was a Grammy Entry List 2011 CD in two categories, “Classical Album of the Year” and “Best Orchestral Performance.” In addition, he has guest conducted the U.S. Air Force Band, U.S. Army Field Band, U.S. Navy Band, “The President’s Own” U.S. Marine Band, the Dallas Wind Symphony, as well as numerous university bands including University of Illinois, Iowa, LSU, Alabama, Florida, West Virginia, Idaho, Georgia, Nebraska – Omaha, Long Beach State, Troy, Bowling Green, South Florida, Furman, Youngstown State, Boise State, Morehead State, Eastern New Mexico, Washburn, Kennesaw State and numerous all-state honor bands and intercollegiate bands. Dr. Locke has served as Editor of The North Carolina Music Educator and has published articles on band and wind ensemble literature in the Journal of Band Research and in Winds Quarterly. He is Past-President of the North Carolina Music Educators Association representing 2,200 members. Dr. Locke is a recipient of Phi Mu Alpha’s Orpheus Award and has received the National Band Association Citation of Excellence on three occasions. He is a National Arts Associate of Sigma Alpha Iota. In 1989, Dr. Locke was among the youngest conductors ever to be elected to membership in the prestigious American Bandmasters Association. In 1994, he received the Phi Beta Mu International Fraternity Outstanding Bandmaster of the Year Award, presented at the Mid-West International Band Clinic in Chicago. Dr. Locke is Past-President of the Southern Division of College Band Directors National Association and hosted the Southern Division Convention at UNCG in February 2000. In 2002, Dr. Locke was nominated for the O. Max Gardner Award, the highest award in the 16-campus UNC System. He also received the “Outstanding Music Teacher Award” in the UNCG School of Music in 2003. In 2005, Dr. Locke was elected President of the American Bandmasters Association and received the Albert Austin Harding Award from the American School Band Directors Association. In 2007, he received The Old North State Award from NC Governor Mike Easley “for dedication and service beyond excellence to the state of North Carolina.” In 2009, Locke became Editor of the Journal of Band Research, the premiere scholarly band publication in the world begun in 1962. In July 2012, Locke was honored by NC Governor Beverly Perdue with The Order of the Longleaf Pine Award, the highest civilian honor in North Carolina. In 2014, Locke was named the Marion Stedman Covington Stedman Distinguished Professor of Music at UNCG. At UNCG, Dr. Locke is the founder and director of the Summer Music Camp program, now the largest university music camp in America, enrolling over 2,000 students annually and served by a staff of 170 professionals. He is also the founder of the Carolina Band Festival and Conductors Conference. Since 1977, he has administered summer music camps for over 65,000 students. He is in constant demand as a guest conductor, clinician, and adjudicator for band festivals throughout the United States and Canada.