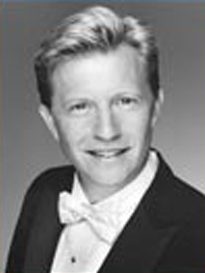 Welborn E. Young is Director of Choral Activities and Associate Professor of Music at the University of North Carolina at Greensboro where he was the recipient of the 2007 Outstanding Teacher of the Year award. Dr. Young arrived at UNCG from Chicago in 2000 and conducted the Women’s Choir, Men’s Glee Club, taught classes in German diction, undergraduate conducting, and choral repertoire at the graduate and undergraduate levels. Currently, he directs the University Chamber Singers and teaches graduate conducting and graduate seminars in choral repertoire. He has been active as the conductor of the UNCG Summer Music Camp Senior Mixed Chorus since 2002. In 2005 Dr. Young was named Artistic Director and Conductor of Bel Canto Company, an ensemble of professional singers. Bel Canto has been featured on the National Public Radio program Performance Today. For seven years, Dr. Young served as the conductor of the Choral Society of Greensboro in performances of major choral-orchestral works. He has been a featured festival conductor at the Concertgebouw in Amsterdam, Netherlands, at the York Minster International Choral Festival in Great Britain, and at Carnegie Hall. He has served as a guest conductor and clinician in festivals and clinics in North Carolina, Tennessee, Virginia, South Carolina, Washington D.C., Illinois and Oregon. His choirs have toured in Europe performing in such cities as Florence, Vienna, Budapest, Prague, Cambridge, York, and London. Dr. Young has presented papers and lead interest sessions at national and international conferences on topics such as the music of György Orbán and Morten Lauridsen, skill building for church musicians, choral techniques addressing the needs of a volunteer ensemble, and choral blend. He has prepared ensembles for John Rutter, Dimitry Sitkovetsky, and Stuart Malina. Dr. Young has served on the board of NC ACDA and is currently its president. He established and administers the NCMEA High School and Middle School Honors Chorus Clinics at UNCG preparing young students for their auditions for Honors Chorus. Dr. Young holds the DMA in Choral Conducting from the University of Illinois Urbana-Champaign and Master’s and Bachelor’s degrees from Middle Tennessee State University.