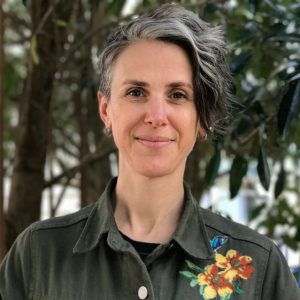 Tiffany Rhynard is an artist, dancer, and filmmaker compelled to make work that examines the consequences of human behavior in an effort to spark a conversation about current social justice issues. Her dance films have screened at festivals nationwide including ScreenDance Miamiwhere she was awarded the First Prize for Invisible Queens(2015) and the jury prize for Black Stains (2018). Rhynard’s award winning documentary, Forbidden: Undocumented and Queer in Rural America, received a 2018 Television Academy Honor for its airing on LogoTV in partnership by the American Civil Liberties Union (ACLU).  Forbiddenwas awarded the first ever Social Justice Film Award from the Southern Poverty Law Center, received the Freedom Award from Outfest Film Festival, and was featured on American Airlines as part of their summer 2017 Pride campaign for LGBTQ advocacy. A cross-disciplinary artist, Rhynard has worked with esteemed collaborators including choreographer Christal Brown, internationally renowned composer Lei Liang, real-time digital media artist Marlon Barrios Solano, mezzo-soprano Sahoko Sato Timpone, and is she currently working with filmmaker and choreographer Millicent Johnnie on a new film. As a performer, she has danced for choreographers including Gerri Houlihan, Laura Dean Dancers and Musicians, and Chavasse Dance and Performance Group. Rhynard holds a B.A. in Dance from UNC Greensboro, and an M.F.A. in Choreography from The Ohio State University. She has taught at colleges and universities throughout the country including SUNY Potsdam, Middlebury College, and University of Florida, and currently teaches Dance and Technology in the School of Dance at Florida State University in Tallahassee.