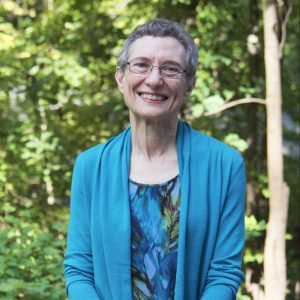 Sue Stinson, Emeritus Professor of Dance, became a full-time faculty member in the Department of Dance at UNCG in 1979, having been recruited to develop the K-12 licensure program.  She subsequently earned her EdD in Curriculum/Cultural Studies from UNCG in 1984.

Dr. Stinson served as Department Head in Dance 1993-2002 and undergraduate coordinator 2002-2012. During her tenure as Head, she led the Department to its first accreditation by the National Association of Schools of Dance and also initiated the BA in dance and the MA in Dance Education, the latter delivered through online and summer courses.  She served as Interim Dean of the School of Music, Theatre and Dance from July 2012 until her retirement in July 2013.

She has published her scholarly work in multiple journals and book chapters, and has taught and presented her work throughout the USA and in a number of countries in the Americas, Europe, Asia, and the Pacific. Her research focused on both theoretical issues in dance education and how children and adolescents make meaning from their experiences in dance education.  In addition, she is the author of two books, Dance for Young Children: Finding the Magic in Movement (1988) and Embodied Curriculum Theory and Research in Arts Education: A Dance Scholar’s Search for Meaning (2016).

An active member of her profession at the state, national, and international levels, Dr. Stinson  played a key role in the initial and subsequent development of standards for K-12 dance education.  Her international service has included a number of positions in Dance and the Child: International, as Chair, Research Officer, international conference co-chair, and Proceedings editor.  She has also served on international advisory boards for publications in Dance and Arts Education.  National awards include National Dance Association Scholar (1994), National Dance Education Organization Lifetime Achievement Award (2012), and Congress on Research in Dance award for Outstanding Scholarly Research in Dance (2012).

Since her retirement, she has engaged extensively in community based activities related to social justice and other civic initiatives, creating a meaningful new chapter of her life.