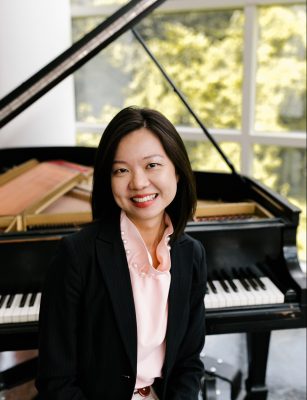 Sophie Wang is an active concert artist and pedagogue who joined the faculty of UNCG in the Fall of 2018. Recent engagements include a lecture-recital and masterclass in Novi Sad, Serbia in 2018, as well as her Carnegie Hall solo debut in May 2016. Other notable appearances include her critically-acclaimed readings of Rachmaninoff at the Internationaler Musiksommer auf Kulturverein-Schloss Rosenegg in Austria in 2011, and her return performance in her native Taipei, Taiwan, which was given to a sold-out audience in 2010. She was also honored to serve as performer and organizer of the long-running series Pianopalooza at the University of Cincinnati College-Conservatory of Music in 2013 and 2014. Her first orchestral collaboration came in 2002, when she performed the rarely-heard Moszkowski Piano Concerto. More recent orchestral activities include the Beethoven C Minor Concerto with the Cincinnati Community Orchestra in 2017.

Concurrent with her performances, Wang has previously held teaching positions at Gulf Coast State College, Florida State University, CCM, and Northern Kentucky University, where she served as Keyboard Area Coordinator. As a clinician, Wang has offered masterclasses and presentations for the World Piano Pedagogy Conference, the College Music Society, and MTNA, where she shares her work in both national and state conventions. Recent presentations include Music Transformed: The Piano Transcription and Its Evolution, A Walk on the (Earl) Wild Side, MacDowell: A Poetic Voice as Seen in the “Keltic” Sonata, and Worth A Thousand Words: Poulenc’s Musical Depictions in Les Soirées de Nazelles.

Wang holds the Doctor of Music Arts degree in Piano Performance from the Cincinnati College-Conservatory of Music, where she was a pupil of the distinguished virtuoso James Tocco. A laurate of numerous competitions, Wang has earned prizes at the MTNA Steinway Young Artists Competition in 2002 and 2004, as well as the Celebration of Excellence Competition (three consecutive years, 2002-05).